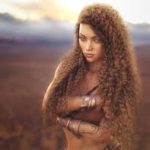 Lorelai had settled down, surprisingly to her parents. Nestling down with a man (of which was enlisted – the army), in a small home set cozily in the mountains. They had been together for three years when he had proposed to her. Of course, Lai had said yes. . . Later on, she was pregnant with his children.

But, during one of his deployments, Lorelai felt nervous. Anxious. Then, Christmas pulled on and his usual visit was skipped. ‘Course, she hadn’t gotten any notice sent from the military, so she brushed it off. Just letting herself assume that things were chaotic back where he was deployed.

Lorelai then stumbled upon Hellifyno, and while she hadn’t found her fiancee back home but doesn’t tell herself that he’s dead either, she’s given up on trying to get back home.

Jamison is slightly taller, lanky. Aurora dainty and small. Both are the same age, being twins, 4 years old. Jamison – flouncing curls that go to his shoulders, freckled cheeks, and vibrant olive-green eyes as his mother has. Mixed skin-tone. Aurora – wild curls that go down her back, long like her mothers. Freckled cheeks and bright blue eyes from her father.