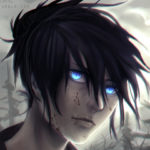 Helvegen, the Ghost in the Moon

Helvegen, the Ghost in the Moon

“If we cannot distance ourselves from the past and move towards the future, we do not deserve the present.”

The Wanderer, Tutelary of Paracosm

Bound by dreams and lace.

As Recorded in The Path of Death:

The tale of Helvegen is a surprisingly lengthy one. It turns out he had quite a bit to talk about; Hellifyno has just been the latest in a long series of misadventures. Most of The Path of Death is spent detailing Helvegen’s activities in the Encircled Worlds. His youth in the mountains, surrounded by daemons who he thought of as family. His departure from home to seek the ghostblade Naervui, his travels with a young dragon and a thief girl, his stand-offs with the elf prince Auranil and all manner of adventures in-between. He became a friend to spiders and an ally of orcs, a guest of vampires and a hero of witches. Things become more familiar once Hellifyno enters the story… or rather, Helvegen enters Hellifyno. A bright-eyed, spirited boy with a mountain of quiet restraint on his back comes walking out of the woods and into the Blue Moon Tavern. Over time, his restraint dies, and just as he seems on the verge of true happiness, he suffers his first great failure on Hellifyno: failing to prevent Ruby’s corruption. From there on, even after parting with Naervui and ascending to godhood, the failures slowly, inevitably, build upon themselves. The Other is born of Helve’s guilt, shame and frustration, given life as a raccoon plush by Niabi Thalen, and merges with Helvegen in a gambit to take his body at the right time and become unfathomably powerful.

Of course, that isn’t all. Helvegen’s feelings are there as well, implied and stated on every page. He has been honest and heartfelt, pouring out the contents of his soul into this tome. His undying love for the Dreamwalker and her faithful maid appears many, many times. He sacrifices his eyes for their sake, and later, dies in vain trying to save them. He never told them how he really felt, but the book sheds his reticence and makes things plain: Helvegen was in love, and that love made him seek a way back from annihilation. It is there, at the very end of The Path of Death, but the writing is inscrutable unless the rest of the book has been read in its entirety. Can you see it?

A thin boy of nineteen, pale and blue-eyed, with long black hair occasionally tied into a ponytail. Helvegen wears a cloak of spider silk over a simple green tunic and brown pants with frayed ends. Instead of shoes, his feet are wrapped in bandages.

Spider Silk Cloak: a magical cloak made of spider silk. Very light and durable. Allows the wearer to cling to walls. Kept for sentimental reasons, rather than practical ones.

Armoury: an armoury that Helvegen has at his disposal. Through the use of Armamancy, he can call a multitude of weapons from a pocket dimension for use in combat. Though he is well-versed in the use of nearly all of these, he favours polearms.

This is the recipe for Helvegen Soup.

– Salt and Pepper to taste.

Toss it in a simple broth and leave it be.

in myself and in those I hold dear.