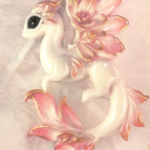 “Isn’t she the cutest lil’ thing!“ Cheenu blinked her large black eyes, Her tiny wings fluttering. The woman held Cheenu out towards the scowling man. Her little paws set on the woman’s slender fingers. Her tail swishing tentatively. She leaned her tiny snout forward, Sniffing the angry one. Mad? She had done nothing! The heavy scent of Anger washed over her. She looked up as he lifted his large hand close to the woman’s face. Worry and Fear wash into her nose. She tilted her petite figure to watch, Head angled at the side in slight confusion.

None. Fore all she knows, No other dragons exist. If she is to meet another creature. Perhaps.

Cheenu let out a squeak of terror, As the woman’s hand loosened. Causing the tiny dragon to fall from those elegant, Slender hands. Her petite wings shot out wards steadying her. She watched as the Man dropped his hand from the Woman’s neck. A heavy, cold feeling shook through out Cheenu, As she watched those eyes glaze over, And the woman fall back. Limp. Dead. Cold creeping up her skin.

The Man turned his attention to her, And snatched her two wings roughly in his hands. Pain! Pain..! She wiggled yelping and scraping her tiny paws against his fingers uselessly. He twisted, Yanking her up. “Hush up!“ He sneered.

“Gorge!“ He called gruffly. Pain twisted from her shoulder blades along her spine. Oh, How it so terribly hurt! Make it stop!

Gorge blinked, As Cheenu thudded against him..“Poor th–..I mean..Uh..Of course Sir! I’m so sorry this ugly..Erm..Mess of useless…Scales..And..Uh..Claws bothered you.“ The Man shoved passed him. “Get it done, Boy.“

“Yes..Sir..“ He breathed, Through gritted teeth.

He threw his portal coin up, Leading to Red Sun Inn. “He never said not to put you in the recycling. Did he now?“ Gorge smirked. Stepping inside the Portal he set her on the counter, Patting her head gingerly. “Stay safe,“

About the size of a 8 year old’s hand. Small wings and a petite figure. She is mostly white, But at the end of her paws, tail wings and horns, It fades to a calming pink. She has adorable large deep, Black eyes.