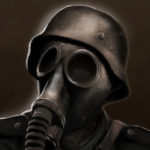 I’ll rp whatever, and I’ll listen and what not. Important stuff I’m too lazy to type.

(btw this is rp stuff not real things, well would this be for actual secrets? I don’t know I’ll just say rp) My great grandpa was in the SS, Grew up believing Jews are bad, and my real (rp) name is Adelhelm Schäfer