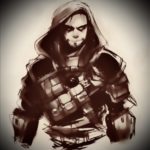 A thief hailing from from 1409 Exeter, he arrived in Hellifnyo after finding a strange portal to Twine in a field of flowers. He suspected it a dream at first, but soon after became used to the thought of wizards and vampires everywhere. Wizards especially. What kind of man doesn’t want to live in a magic world?

Originating in Olde Watch, he stayed around, bartering for stolen goods and most likely stealing them back. He settled with leather armor and a hood yet. Needless to say, he wears plate armor, gauntlets and all, and under his helmet lies a thick, shaggy black hairdo, and a face that always seems in need of a shave.

Besides carrying his sword, he also keeps a picture of his family crest on him at all times. Don’t ask me where he can stuff a glass picture and not break it.

Needless to say, the warriors of the 1300s were far from brutal.

“He likes all the usual things—hunting, feasting, and, by his own admission, seducing women, especially peasant girls—but he also loves the song of the nightingale and the scents of roses, musk, violets, and the lily of the valley. The image of a great war leader closing his eyes and inhaling the aroma of flowers reminds us that some medieval lords are far from two-dimensional violent thugs.”

– Ian Mortimer, “The Time Traveler’s Guide To Medieval England, A Handbook for Visitors to the Fourteenth Century”