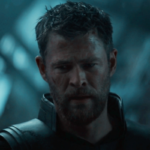 Thor was once a reckless boy, knowing nothing of the error of his ways, only headstrong with a vision of being the future king. He became a great warrior for Asgard as he aged, fighting many glorious battles, and defeating many ancient foes. A true son of Odin, favored by many. However, those glories would come to an end. After endangering the very lives of his own friends, the all-father, as punishment for committing such a reckless deed, a near crime, banished him to Midgard, relieving him of his title and all his powers—

—leaving him a broken man.

A kindly group of humans, though after incapacitating him, gave him a place to stay for the period of time he would spend there. Word reached his ears of something that he presumed to be Mjolnir, his hammer that followed him through the Bifrost. Determined to retrieve it, he enlisted the help of the human Jane to give him transport to the crash site. He launched an assault on the facility that had surrounded his hammer in a valiant effort to reclaim what was his, but once reaching it, he was greeted with a sad truth. After years of using the weapon as his own…

He would no longer be able to lift it.

Without it or his powers, he was mortal.

In custody, his brother Loki gave him the news of their father’s timely passing, Thor’s spirits were broken even further when he was told that he could never return to Asgard; to his friends, his family, his home.

Now accepting the state of being stripped of his godly powers and relations, Thor resigned himself to live a normal life on Midgard, where he would correct himself of the mistakes he had made before.

But still, danger sought him out, The Destroyer arriving from Asgard in search of one thing: To end Thor’s life.

But in death, there is also hope.

“Whoever holds this hammer, if he be worthy,

shall possess the power of Thor.”

The selfless act of allowing the giant to slay him had restored him to life, and bestowed upon him again, his right as The God of Thunder.

Once the destroyer was defeated, he, Lady Sif, and the Warriors Three traveled back to Asgard where he defeated Loki, at two costs; returning to Midgard, and what he believed to be his brother’s life. But to spite all of that, he was a changed man, and now allied with The Avengers, he seeks to change to universe for the better.