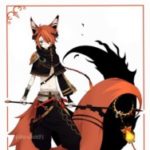 When he was a boy before he was a kitsune He would always have a midnight walk in the sacred woods next to his house One time he saw a beautiful fox and he walked towards it. The fox ran and led him to a shrine. He entered the shrine and a blinding white light flashed. He woke up in the middle of the forest and looked around. The boy was confused by where he was and he felt something twitch on his head. He felt his head and felt a pair of fox ears. He got up and looked at himself. He had a kimono on with some shoulder plates. He looked to the side of him and there was a staff. He picked up the staff and now he helps and heals people who get lost in the forest.

I have orange hair, ears, and tail. I have blueish purple eyes and tan skin. I wear a black kimono with gold patterns on it, I have gold shoulder armor with a owl engraved in them. I have a black pattern on my tail. My staff is black with a black moon with a gold pattern on the end of it, with an owl statuette attached to the end of it.

Staff, wild fruits and berries, healing medicine, feathers, a flute, a few trinkets I’ve collected, and a brown satchel to hold it all.