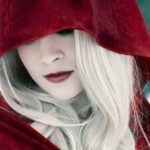 She had always been different. From the time she was born, the nights before death would be sleepless thanks to the endless crying in which her unwed mother could never sooth. It was not long before the hushed whispers of the townspeople drove her and the small infant out. The young woman had convinced herself that it was the town that had been cursed and not her child, but no matter where they went the same thing happened again and again. At her wit’s end and suffering from crippling depression, the woman jumped off of a bridge into the swift currents of a river, her unnamed baby in her arms.

The water spirits felt bad for the innocent child who had done nothing to deserve such a fate and this ability of hers was no fault of her own. Instead of blessing the mother with the gift of purpose after death, the spirits bestowed the child with the task. They transformed her, furthering her gifts as a herald of death. Local legends would say that there was a fae haunting the woods, that those that heard her mournful shriek would surely die the next day. Others would dare those brave enough to look for the washerwoman, the ban-sídhe, who lurked by the stony shores of the river, shrouded in mists that she wore like a veil as she washed the garments of the newly deceased. Rumors had it that if you approached the woman from behind and captured her, she would answer any question truthfully and grant you three wishes… if you lived to tell the tale.

No one could agree on the fairy woman’s appearance for she looked different to each one that approached. Some say it was because she never had the chance to grow into a mature woman while others blamed the elusive mists that hid her from plain sight. Whenever people did catch glimpses of her, they would often describe her as dirty and grotesque – matted hair, buck teeth, dirt, and commonly with webbed feet. This was a type of precaution on her own part. Beauty, she had learned, was something humanity craved, therefore, if she were perceived as hideous they would want to stay away. There were also whispers on the wind of a previous washer from long ago. The man that sought her out had fallen in love with her beauty and stopped at nothing to be with her. A romantic notion had it not been surrounded by the accompanying bloodshed and horror. So as a means of protection, she never showed her true self to anyone whose footsteps carried a mortal weight.