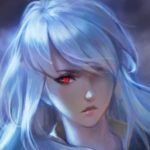 Ruby and Valix had done it. They had made love and now, They had proof of their love. A child.

Ruby was pregnant and proud. She felt pride for the child that was to be. Valix was smug, over-whelmed by the feel of sucess. His plan had unraveled and came to life before him.

Ruby loved Valix, Truly. She had beleived he loved her as well.. Then the war happened. Valix claimed he had only ever loved the woman for wealth and power, And they had a huge fight. Ruby nearly killing the man but not having the heart to kill the man she once loved.

So.. In the night, Valix left. With Eira, Raising the baby. He was going to manipulate and take advantage of her power. Use her, For his benefit.

As Eira grew older, She began to realize what her father was doing. She felt a new hatred and rage unravel in her.

He had told her so many stories of mother’s cold-heartedness, When now, She didn’t even know if they were true.

She gave her father a fair kick in the ass her self, Informing him she understood why he TRULY took her from Mother.

Eira had journeyed long height’s, Before she arrived at Persistence.

15 and living on her own, She has freed herself from the cruel workof her father’s commands. To live her life.

She has rented a room and lives a pretty content life there.

She also is a goddess, But doesn’t yet know this. Her father never told her, And just left her with her Mother being a very powerful mage.

Eira having her Mother’s power’s, She hopes to find someone to help her control and learn her power’s.

She stands at 5’5 and has long legs. Long silver hair, sends white waves down her back and stops at her waist. She is 15 but appears slightly older, About 18. Reason being 18 is her age of which she stops ‘ageing,’ and that’s her Physical looking age.

She has bright red eyes, And pale skin. She also got a tattoo of a white crystal, That she saw on one of her father’s antique necklace’s, On her collarbone.