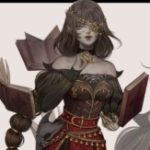 Abzeila Rosbloom, a Sorceress with an innate connection to the spirit world..

Born with an innate connection to the spirit world, Abzeila Rosbloom was discriminated against and considered a bad omen. When she was 16 she was completely run out of her village and forced to make a life for herself without anyone else. She slowly learned to control her abilities and put them to use. For a while she made money by speaking to the dead for people, whatever their reason for wanting to do so may be. By the age of 19 she had gathered enough money to be able to buy books on magic, and slowly began teaching herself in the ways of the arcane. Years later and now she is a studied scholar of the arcane who has honed her natural, yet otherworldly abilities as much as she has honed her magical.

Though now she feels lost. She spent all her time refining her abilities, but now she doesn’t know what to do with them. She now wanders, searching for her place in the world.

Eyes: Grey, though glows an otherworldly blue when using her spirit world abilities. Her left eye is missing, she was born without it.

Apparel: Varies, usually in robes of some kind though. She always wears something over her missing left eye.

She usually has a book or two on her.

Nothing you need to know about…

Even when you've died, if you can help, then you should.