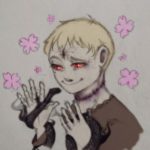 NOTE: If you are sensitive to heavy themes, do not interact with my character. We can talk, however, and maybe become friends!

Both (mostly leaning to males) and it doesn't matter what species. This demonic entity is a big power bottom, and would love someone to make him listen to them.

It's difficult to make him tame and loyal—kudos to characters who can get him to stick with them and actually gain his affections.

Ocellus mostly uses the image of a 12-year-old boy named ‘Ezekiel’ to the public despite his ability to shapeshift into any animal or human being in just a snap. However, while does sleep around with anyone anywhere with any form, he can’t bring himself to do that when he is in the image of the light blonde-haired child.

He has two favorite appearances he uses: One as Ezekiel and one as Ocellus himself.

A 12-year-old to 13-year-old with short, curly, and seemingly soft light blonde locks, and bright purple eyes. He is thin, pale, and has stitches circling his neck (if not bandages). The horizontal scar (and sometimes fresh wound) on his forehead is actually a result of one of Ocellus’ features—a third eye.

Truth be told, this particular form was a complete replica of the first human Ocellus possessed when he had been rebirth from death as a demonic entity 300 years ago. Even before then, he was fond of this host but he doesn’t know the exact reason why.

Style isn’t an issue for him as Ezekiel. Though he prefers loose and fancy clothing when walking in public (Especially loose and large long-sleeved garments with frills and ribbons).

“It’s a really soft material! And goes well with a lot of clothes so why not?”

He is never seen without it around his neck. He claims it helps to hide the stitches that ran around his neck but he has reasons much deeper than this.

News boy cap or a Beanie

He’d rather keep the vertical scar on his forehead hidden than deal with questions from ‘concerned’ strangers regarding the origin of the wound. Though there are times he just doesn’t wear this because he either forgets or misplaces it anyways.

“They’re either truths or lies—depends which between those will you believe in.”