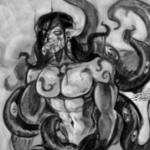 An interdimensional invader that seeks too expand its domain, they are one mind and soul

A man who likes peace and quiet

Otherworld discovery log week1: this world is strange yet beautiful, Huge towering fungal stalks and caps hung over head while mountain sized trees obscured all light from above odd misshapen  creatures , the world seemed too be fine tuned nothing simply lived organisms had been observed performing what can only be described as “working”, gatherers could be seen planting seeds aswell as bringing water too it despite being animals, predators seemed too act more as shepherds than wild animals. Report over.

Otherworld discovery log week 2: we have determined that the predators seemed infact eating the dead but the gatherer lifeforms don’t seem too care some even observed dragging recently decesed too be eaten if bot culled.  However the predators have become hostile too anyone who has actually slain something here,  we’ve lost two men here,  however something is bothering me,  report over.

Otherworldly exploration log week 10: the wildlife has left the area however we believe too know the reason, the weather hasn’t changed at all here but we have heard the call of an unkown species further exploration is required. What’s more is that several soldiers have reported strange growths and splotches on they’re skin, a team sent too survey grew trees should return soon. report over

Log week 40: the camp has been destroyed personnel have been lost against them, they have been watching and learning from us for I I’m not sure how long, they mutated again last night,  a few gatherers had gotten taller with long segmented arms. Some have been observed too interact and possibly use weapons left from what remains of the changed soldiers can barely move and seems too only try and blend in with its environment

Last log: I’m alone now… They’re all either dead or changed… They have left me be for now but I’m not sure why, if they don’t kill me on the next rush,  well at this point it night not be worth it. Too think this all happened becouse we climbed that freaky “tree”

They speak now: it has been months since my last log and I’ve begun hearing the creatures speaking gibberish sentences hearing they’re voices again…hurts

Waking up : I fell asleep and when I woke up something had entered my cave,  it was something new something scarily humanoid, it spoke in brief sentences but it was trying too ask me what I am, I told it too leave and too my surprise it left

It’s back: the thing is back again,  the bastard was watching me sleep.  The thing wanted too know why I slept, asking why I don’t discard my body for a new one instead. I want to leave

We’ve been talking: this place… Is appearently all connected , we changed it… We did this it exists as it does becouse of us

It knows of home: it has offered too help me build a new portal I just have too go with it…. I’m considering my options….

I was a fool: the fucking monster tricked me,  it brought me too one of those fucking “tree” and entered my mind,  it took everything I knew about the portals. I can’t remember any of it either it literally stole my memories…. Why?!

The portal:….they did it… There’s so many of those creatures now….. What have I done?

All that lives shall be awoken,