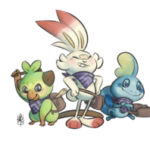 All three are unmated

Grookey is a chimp-like Pokémon, with a green colored body, brown tail and ears, and orange limbs and snout. It has two large eyes with a beige-colored mask surrounding them. It has two leaf-shaped hair tufts that hold a stick on the top of its head.

It uses this stick to beat rhythmically against the surfaces of all sorts of objects. This has been observed to cause grass to grow, and wilted flowers and leaves seem to regain their color when Grookey drums nearby. It is said to be full of boundless curiosity. The stick used to be a branch from a forest where troops of Grookey lived, and it has a special power due to being exposed to the energy within Grookey’s body. Grookey’s green fur can create energy from the sunlight.

Sobble is a small Pokémon that has light-blue skin with darker teal patches and a lighter blue belly and face. It has similar teal eyes with white pupils and sclerae. It also has a yellow fin-like protrusion from the top of its head bordered in dark blue, as well as a curled blue tail tipped in the same dark blue. It has thin limbs, each of them ending in two thin appendages, it can use these to stick to walls and easily climb them.

It can run around as both a quadruped and a biped, and use its forelimbs as arms. Sobble has the ability to camouflage itself in water where it hides itself. When it touches the water, Sobble’s body changes its patterns and colors. This allows Sobble to blend into its surroundings. Due to being a bit timid, should Sobble get nervous or embarrassed, it will secrete water from its body like sweat in order to disappear into its surroundings. Sobble’s tears can make others cry; the effect is so powerful that its tears are said to be as potent as 100 onions. Should it feel threatened, Sobble will start bawling and spreading its tears around the area, causing anyone near it to start crying uncontrollably. It will use this distraction as means to escape.

A warm-up of running can cause the fire energy in Scorbunny to start coursing through its body. When this occurs, Scorbunny will be able to fight at full power. The special pads on the back of feet and nose can generate heat once it is ready to fight. Scorbunny loves to run and is filled with energy, and can start small fires from underneath its feet. By using its powerful legs, Scorbunny can run and jump around its opponents in order to confuse and disorient them. It is a rare pokemon that is found more often under the ownership of trainers