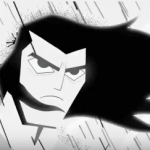 SETTING – It is difficult for me to think of a story that Jack could not partake in, seeing how vastly varied his many adventures have been. Therefore, I welcome all Roleplayers.

S1/4-S5 JACK – Unless stated by you, I will usually choose whichever Jack fits in to our story the most. Either the young gallant hero, or the 75+ old, rugged, emotional wreck.

WRITING ‘GUIDELINES’ – I do lean towards a paragraph style of roleplaying, as  I tend to add as many necessary details as possible. However, when characters exchange short dialogue between each other, they may vary in size. As long as it is comprehensible and gives me something to work with, I’m satisfied.

MAGICAL SWORD – It’s magical. I have taken the liberty of interpreting its properties as over powered, i.e. able to cut through anything that stands in the way of Jack’s quest of battling evil. I do not want to heavily rely on it, as it is interesting to modify means in which Jack solves conflict other than ” SWORD“.

REPLY TIME – I wish to respond as consistently as I can, but I tend to set roleplaying aside when real life comes into focus. Therefore, there may be unprecedented breaks now and then.

Half a century later…
After I’ve been thrown centuries into the future, to the dystopian, Aku-infested land, I’ve searched far and wide for any means to aid me in my journey back to the past. I have taken any chance I could to take on the sorcerer, but to no avail. 50 long years have passed. I have not aged a day. I am beginning to lose hope. Aku’s grasp chokes the past, present and future. I am haunted by my past. Each day I am reminded of the atrocities committed, for which I am responsible!…
…But I have not forgotten my purpose.

Throughout the fifty years Jack has spent in the dystopian land, he has become better versed in future technology, adding that to his already impressive arsenal of skills. At one point, he has lost his sword, forcing him to expand his horizons in regard to alien weaponry. Jack does not abstain from employing firearms in his battles or the use of vehicles, traversing the land on an advanced motorcycle, armed with spiked wheels and other combat inclined features.

Adapting to the times, Jack also sports a dõ, a durable body armor, akin to that of the Samurai, allowing him more sustainability in battle.

The people of this land have seen fit to call me, simply, Jack.

Subject of love has long since been beyond my reach. What lies at stake is a matter far more grave than love.

I have trained my entire life, under many experienced teachers, to defeat Aku. I’ve devoted all those years, honing my skills, believing when the day would come, I would be ready. Yet the sorcerer deceived me! I returned to my people as their final beacon of hope, only to then abandon them to the hands of evil. How could I have been so foolishly arrogant… I must return. Go back to the past and stop the calamity that has ruled this planet for far too long. With my magical sword, entrusted to me by father, forged by ancient spirits, I will cut through any foe or obstacle presented to me until I conclude my timeless battle with Aku and put an end to his regime!

A white robe, geta; my footwear. I occasionally use my takuhatsugasa; a straw hat I use for traveling

The sword I inherited from my father, enchanted with magic able to slay any evil. It is an everlasting reminder of my quest, to free my people and defeat the demon, Aku.

Time has lost its affect on me, therefore, I do not age.

I may be lost, but I will find a way… I always have.