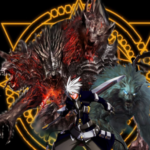 Gatekeeper and Leader of the Empty Seat in the Fallen Core.

–The Beginning-
There was a time when Ulfric was an ordinary person, a wife, a child, dependable friends and honest work. He was content with his life, and had no aspirations to achieve more. Had he made it to the end of his life, he would have died happy. However, his potential caught the attention of Aradia, a powerful sorceress trying to obtain godhood. She wanted him to venture into the world, and gain her followers, and she would even grant him the power to do so. Ulfric refused what he thought was an offer, he was content and happy where he was. It wasn’t an offer, and for his disobedience, Aradia took the life of those closest to him, and harvested their souls to use against him should he disobey again. She cursed him with lycanthropy and gave him power over earth. His one goal was to create more children of the night for them to worship her as the Mother of the Night.  Over time, he completed his goal, and the Mother of the Night attained godhood. By this time, those he once loved were forgotten, his loyalty and love lay with Aradia. He continued to wonder the world, doing her bidding until he was captured and forced into slavery by the Red Hood Coven. They were a female only sect of vampires that used lycanthropes as bodyguards. He was tasked with protecting Dajana, the coven’s second in command. Ulfric Prayed to Aradia on his first night as a slave, and she replied. The vampires were also children of the night and it was her command that he do as he was tasked by them and to eventually convert them to her side. With his power over earth and mastery of lycanthropy, Ulfric quickly earned the nickname Big Bad Wolf. He grew to enjoy the company of Dajana, and protected her of his own will. During a battle with their greatest rival they were banished to a different world. Dajana did not survive the battle, and Ulfric was completely lost.

Ulfric wandered through the new land until he collapsed from exhaustion. He lay there teetering between life and death, until a man named Ray found him and offered him a simple choice, join him or die there. Ulfric agreed, and was instantly overcome by an intense pain. For 3 days he writhed in pain, as his body and soul took on a new form. At the end of day 3 he stood tall as the newest member of the Zoan race and of the Zoan group known as the Fallen Core. For years he served Ray faithfully and was rewarded with higher and higher ranks. Soon he was one of Ray’s most trusted Zoan, second only to his own brother. Everything changed when Ray’s brother died in battle. Ray began his slow decent into madness, and was taking the clan with him. Ulfric lead a rebellion against Ray, and won, being declared the Fallen Core’s new leader. He soon resigned, but first made new rules that would ensure the clan’s survival. His new position was the leader of the empty seat, a position with now power over the clan, but one that made sure the clan would never die off. Now he journeys new lands in search of new members and sometimes a new Queen to rule his people. His past has long been forgotten, only the future remains open.

Caramel skin covered in light scars. His only tattoo is the large Zoan seal on his back.

Teeth are all fangs

Fur is black with hints of cobalt

A tattoo of golden light that spins just above the fur of his back. It is the crest of the Zoan clan and the Wolf Zoan tribe and marks him and all Zoan as a member of the clan.

A long navy blue jacket with many visible and hidden pockets. Enchanted for elemental resistances (Worn around waist in Zoan Wolf Form)

1 Large book with a leather cover. His personal emblem in silver on the books cover (hangs at hip)

1 bag of 30 copper,1 silver piece and an odd coin (tucked in a slightly obvious pocket on his left pant leg)

1 pouch of dried fruit and nuts

Many containers of the plum wine Rakija.

If lack of power is your ailment, I have the cure….