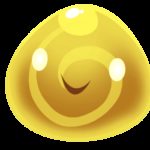 Born by accident in the laboratory of Professor Possibility while the mad-scientist was experimenting with macrounicellular life, The Unicellular Nascent Organism (UNO), is a perfect accident – a combination of a lot of research that went interestingly wrong. After it ingested enough material and grew large enough, the UNO managed to prove its sentience to its creator, and learned enough to name itself ‘Una’, because that ‘sounded prettier’.

Not wanting to keep sentient organisms in her employ, Possibility sent the Una to find something else to do, only asking that it call every now and then and tell her how it was doing.

So of course it ended up going to a galaxy far, far away…

It is a large unicellular organism, most similar to an amoeba due to the presence of pseudopods as means of transportation and manipulation of objects, but also contains other structures and organelles within its cytoplasm, most notably a nucleus capable of producing complicated chemical reactions that are analogous to brain activity and very simple sensory dots that function as eyes, ears, and nose for the Una. It is also very green.

The Una has a series of odd mutations that tie into a few special realms of research conducted by Possibility, namely:

Self-Replication – The Una can self-replicate if given enough material to work with. This produces an exact copy of the Una.

Quantum Entanglement Spatial Teleportation – The Una can transport itself via large-scale quantum entanglement, granting it teleportation capabilities over short distances if it has enough energy.

Electrical Discharge & Conduction – If it has enough energy, the Una can convert that energy into an electrical discharge. Its body also conducts electricity very well without harm to itself.

Adaptation – Over time, the Una can adapt to different conditions either as a reflex to continuous stimuli, or, if given enough energy, instantaneously through conscious effort.

Informational Transfer – Aiding in the Una in its search for evolution, it can learn new things, and then transfer that information to other Una by joining with them. This does, in turn, ‘end’ that Una’s specific existence, when an Una divides again, the new Una formed know everything that the original did.