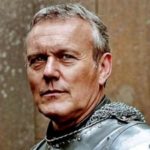 BIO & INFORMATION (Both from Merlin as well as Arthurian Legend)
MERLIN TELEVISION SERIES:   Uther Pendragon was the King of Camelot and the father of Arthur and Morgana Pendragon. He was seen as an immutable ruler, with his laws upholding duty and tradition while defying the use of magic. All magic users and people suspected of using magic were killed under Uther’s command. It was his hatred of magic and severe punishment of those who used it that ultimately caused Morgana to turn against him. Her subsequent betrayal proved to be an emotional blow that Uther never overcame, leaving him a broken man in the final stretch of his reign. He later died at her hand after having been mortally wounded by an assassin, with Merlin’s healing spell backfired by Morgana’s enchantment. After his death, he became the father-in-law of Arthur’s wife, Guinevere.
————————————————————————-

From Geoffrey of Monmouth: Uther spent his youth in exile in Breton with his elder brother Aurelius Ambrosius. They return to Britain to dethrone Vortigern, and Aurelius is made king. He sends his brother and Merlin to Ireland in order to fetch the Giants’ Ring. When Aurelius is poisoned, a celestial portent appears and Merlin interprets this as forecasting the glories of Uther and his unborn offspring. The main feature of this portent is a luminous dragon, whence Uther’s sobriquet “Pendragon”. Geoffrey explains it as meaning “a dragon’s head”, but more probably it means “head dragon”, which may be interpreted as “foremost leader” or “chief of warriors”.
Uther becomes king after his brother’s death and holds court in London. When the nobles present themselves before the new king, Uther falls for Igraine, the wife of Gerlois, the duke of Cornwall. She refuses to lie with him, infusing his desire for her even more. Determined to have her, Uther leads an army to ravage the ducal lands. Gerlois rides out with his men to meet the army and while he is away, Merlin magically alters Uther’s appearance so that the king now resembles Gerlois. Uther enters Tintagel and lies with Igraine, who mistakes him for her husband. Thus, Arthur is begotten. The real Gerlois falls in battle, and Uther resumes his true shape and marries Igraine. In exchange for his help, Merlin demands the offspring of this union.
The remainder of his life is troubled by ill health and aggressive Saxons. Some sixteen years later he dies — similarly to his brother — by Saxon poison. Legend has it that he was buried besides his brother at Stonehenge.

The Prose Tristan says Uther was once in love with the wife of Argan who defeated him and made him build a castle. The Petit Brut tells how he fought a dragon-serpent in Westmorland (now part of Cumbria). Henry of Huntingdon calls him Arthur’s brother while a Cumbrian legend makes him a giant. In Cumbria, he is said to have founded his kingdom in Mallerstang and to have tried to divert the River Eden to make a moat around his castle.

Yet Another Source: Uther’s story is first told by Geoffrey of Monmouth in his “History of Kings of Britain”. As a one of the two younger brothers of the murdered King Constans, he apparently fled, at a young age, to the Royal Court of his cousin, King Budic I of Brittany and here he was raised. As a young man, Uther returned to Britain with his elder brother, Ambrosius, and together they fought for their ancestral rights, eventually defeating the usurping Vortigern and placing Ambrosius on the throne.
Throughout Ambrosius’ reign, Uther was his brother’s staunchest ally. He commanded the King’s forces in Ireland when, with Merlin, he acquired the “Giant’s Ring” as a memorial to the dead of the “Night of the Long Knives”. Later, it was Uther who was victorious over the rebellious King Pasgen of Buellt & Gwerthrynion at St. Davids (Mynyw).
Uther took the crown under the title of “Uther Pendragon” after a dragon-shaped comet appeared in the sky at the time of his brother’s death. Most of his reign was taken up with campaigning against Saxon and Irish invaders in the North of Britain, where he held court at Pendragon Castle in Westmorland. He was, at first unsuccessful against the Angles of Bernicia. Osla, allied with the Jutish Octa, defeated Uther’s armies at York (Caer-Ebrauc). However, he soon turned the tables at the ensuing Battle of Mount Damen. Uther later travelled even further north to help the Kings of Strathclyde pacify the Scots.
It is at this point that the most famous episode in Uther’s life is related. Returning to London (Caer-Lundein), he met Ygerna, the gorgeous wife of Gorlois, Duke of Cornwall, and fell instantly in love with her. Determined to see her again he invited the Duke to return to the Royal Court, but Gorlois could see what was going on and flattly refused. The two quarrelled and Gorlois and his wife fled to Cornwall. Uther invaded the Duke’s lands, but still impatient to be with his new love, he persuaded Merlin to use his powers to magic him into Ygerna’s bed. Thus, while Gorlois was being killed at nearby St. Dennis (Dimilioc), Uther was transformed into his likeness. He walked straight into the lion’s den at Tintagel Catsle (Din-Tagell) and seduced the lovely Duchess. Sir Thomas Malory’s “Le Morte D’Arthur” claims that the price for this deception was that Uther’s son, the future King Arthur who was conceived on that night, had to be given to Merlin to be brought up as he saw fit. Robert de Boron says Uther was responsible for the founding of the Order of the Round Table.

In old age, the sick and aging Uther was drawn into a renewed war with the Northern Angles. When his commander, King Lot of Lothian (Gododdin) was unsuccessful, the King was carried to St. Albans (Caer-Mincip) to besiege the Anglian Princes himself. He won through, but the Germans poisoned the water-supply and Uther, along with many of his men, died in the days that followed.
Despite the popular myth to the contrary, King Uther Pendragon was not created from the imagination of Geoffrey of Monmouth. He appears several times in earlier Welsh tradition, both in his own right and as father of King Arthur. In the 10th century poem, Pa Gur (“Who is the Porter?”), one of Arthur’s companions is given as “Mabon ap Mydron, servant of Uthir Pen Dragon”. A poem in the Book of Taliesin (some of which may date back to the 6th century) mentions Arthur and is named after Uther himself as Marvnat Uthyr Pen. Ymiddiddan Arthur a’r Eryr (“The Colloquy of Arthur and the Eagle”), a poem contemporary with Geoffrey yet showing a primitive tradition independent of him, identifies the eagle as Eliwlat mab Madawc mab Uthyr and a nephew of Arthur. Uther also appears in several early Triads of the Island of Britain and the personal name is known from other pre-Galfridian sources.
As an epithet, Pendragon can be interpreted as something like “Foremost Leader,” “Chief Warleader” or “Chief of Warriors”. In the Cambridge version of Nennius’ “History of the Britons,” there is an addition to Arthur’s name of the line “in British mab Uter, that is in Latin terrible son, because from his youth he was cruel”. This unlikely reference to Arthur’s early character, has encouraged some researchers, to see Uthr-Pen-Dragon as a mere title (Terrible Chief Warleader) which should be applied to a King of another name. The most popular suggestion appears to be King Meurig ap Tewdrig of Glywysing and Gwent, as suggested by Blackett & Wilson and Barber & Pykitt. 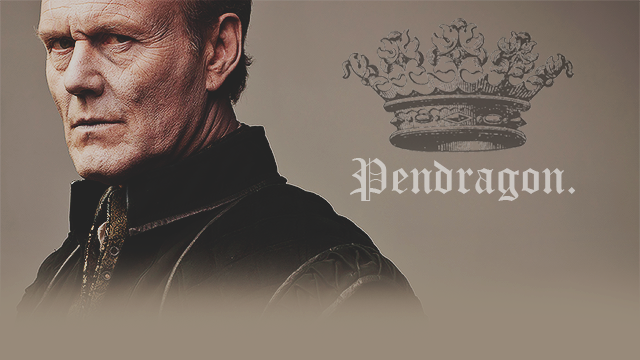 Magic is evil and will always be forbidden in Camelot