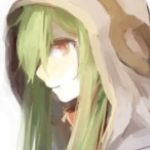 Her parents died when she was four. Ever since then she was in an orphanage in hell. And yes, it is as bad as one would think. But one day, somewhere in the 1870’s, Nexus Luciferson offered to teach the children of the orphanage. Verne has refused to allow her body to grow up, so she remained ten for a few hundred years. But today, she allowed her body to age. She is now mentally and physically a eighteen years old..