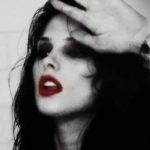 “I’m never letting go.”
Some say she is one of the ancients, the old ones, the originals
or whatever else you might call them. She will never tell but this
much is true: She is not someone you want to cross.
The Woman:

Her name is Valentina Zolnerowich. It’s unknown if that is her real name or one she fabricated. Nicknames follow as “V”, Val, The Vampress, The Russian Bitch and many more. She is sure even more are yet to come.  Her age is also unknown but she looks to be in her mid to late twenties and in good health. She is a spitfire when she needs to be, a seductress when the mood strikes her and cherished ally; if you can convince her you’re worth the restraint of not sucking dry. She might appear cold and emotionless or intense and fierce. When the layers are slowly taken down her vulnerability becomes more visible. She can be soft, and loving and protective. It just takes the right touch to find it.

Few know the heart of this woman. Even fewer who know are alive to tell the tale. She is a lover of all who strike her fancy, both men and woman. She sees them all as vessels for subsistence and pleasure. Living so long she is jaded to most advances but when the mood arises or if one is gifted enough to make her curious she may pursue. She can enjoy a good fuck while draining the life from her lovers body like a black widow. She can sometimes be persuaded to let them go, weak and strangely wanting more of her. It takes a special person to claim her heart as theirs and theirs alone. It has happened once but tragedy has made her more resistant to giving in. If you seek to mate her, it will be a challenge.
The Legend:

The vampire species she has been created from has a few specific facts, abilities, and skills:
*They feed on blood to keep mentally and physically functional.
*They don’t age
*They have heightened senses as well as strength, speed and agility.
*As a split from the demonic species, her kind has a weakness to holy relics and structures though she herself has aged to the point it does not effect her.
*Her kind does not burst into flames in the sun but it makes them incredibly weak and more noticeable as vampires. Again her age makes these things not a problem for her.
*When angered, starved or aggressive their eyes turn red and glow fiery, their natural way to intimidate foes and prey.
*When in the same mindset fingernails shift to sharp points and grow up to 3 inches in length to use a weapons along side their signature sharp elongated canines.

*On the opposite side of the coin when aroused, extremely pleased or sated from a feeding, the eyes glow a cold silver.
*With the same eyes those who have a few decades of vampirism can compel, distort the mind or use a unique ability to them against a weaker foe/victim. For example Val has an electric tough, she can literally give someone a jolt, at worse shock them to death.
* Her kind is not curse with never seeing their reflection, she looks in a mirror quite often and with pride. She knows she looks good.
*Conception is rare but possible. There is a single night when the undead can attempt to conceive with one another or a living partner. Winter Solstice. There is an increase in the supernatural powers that be, leaning more on the side of those who thrive best in the night. Vampires can attempt to ovulate or bring their sperm to life on such a night and breed. It is most successful with a male vampire and living female, though commonly the female will likely die giving birth. At any rate the gestation is enhanced depending on the species of female. A vampire female gives birth in half the time, four and a half months give or take.
We are

The Fold
Rules:
–Warning: Mature content including strong language, gore, violence and sex. 18+ only.
-This player is over 21 and female if one wonders.
-No killing my character or controlling her actions I will dismiss the rp immediately.
-Smut is okay but only in natural motion with story development.
-Para+ is preferred and proper grammar is encouraged. I am no perfectionist though.
-I will do my best to inform you if I am going to be away. I might also need time to
think a reply to comment rp. Please have patience but don’t be afraid to ask if I got
your comment.
– I will accept friend request to rp in pms or comments. I get no reply in a week I will unfriend.
-If you friend request/pm you start. If I do, I’ll start.
-I’m starting a coven. All species are invited but vampires are the highest hierarchy and there is a chance a mortal character will become “indentured servants” to gain the blessing of being a vampire. Mortal slaves are also possible in this coven. If you would like to join in any of the positions, have ideas or questions, feel free to inbox me, pm or comment below.
-I look forward to meeting you.

Someone who can handle me.

Her past is unknown, shrouded and mystery and fanciful tales. She wanders worlds, an ancient jaded and alone. She seeks a new companions to call hers. Whether made or brought into the fold she will find you and if you are deemed worthy she will take you, whatever it takes.

Long black hair, onyx black eyes that can change to silver or red depending on the emotion. Seemingly small body but well toned and curvacious.

Fangs, nails that extend into strong sharp claws when provoked

I’m afraid to be alone.

Death is only the very beginning. If you're lucky.