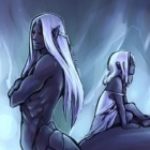 Appearance: Valyln has dark obsidian skin which is almost as inky black as his arachnid body, his long white hair has two braids that go back and are weaved together behind his pointed ears. His eyes are a bright red and glow faintly. From the waist up he is drow, from waist down is the large heavy abdomen and legs of a giant spider armored with chitin.

Personality: Valyln is very shy and never seems very comfortable in the company of others. He is quite friendly despite his standoffish nature and appearance. Valyln often daydreams about being a tailor, finding the idea amusing, though it captures his interests.

Valyln is sometimes accompanied by gloamings, and is also almost never without his younger companion, Lilith. It is almost always predictable that wherever Lilith is, Valyln will be there too.. Even if you can’t see him.

Gloamings are short humanoid creatures with glowing skin, furry wings, and grey cat-like eyes. These creatures are extremely rare and are almost never seen above ground. They often live 200-300 years and reach adulthood at 13, and are immune to illusion spells.

Artifacts: Taulmaril (The Heartseeker) – Magic long bow – When an arrow is fired from Heartseeker, it becomes a whistling streak of silver light. Arrows launched from Taulmaril can easily bury themselves halfway into stone leaving a burned scorch mark. After a few minutes, arrows fired from Taulmaril magically dissolve, which causes a minor hissing sound.

Appearance: Lilith is very small, thin and weak. Her eyes glow a bright blue and she wears a dress of fine weaved silk, her hair is white anf short, framing her obsidian face and shoulders.

Artifacts: Old Staff – Both ends of the wooden, rune-scribed staff are shod in iron. At the top a fist-sized sapphire pulses with enormous arcane energies.

Menzoberranzan, the city of spiders, is a matriarchy and large drow city located in the Underdark. It had been Valyln’s home for many years, the charming young drow soon to take his fathers place on the Counsel of  Houses. All seemed to be fitting nicely into place in his life, well respected and proud of his position and title.

As a child, the life of a drow is not an easy one. Fun is weakness and compassion is shameful and punished. Beat to be cruel and hateful and to never trust anyone. Though Valyln wasn’t spared the lashings of a whip or the strike of a pommel from either parent, it never seemed to set in that he was supposed to be like everyone else. His sister was deciplined and tame, a dog to her kin unlike her brother whom saw himself as adventurous and free. She despised him, despised his smile and his charm. He was the favored child, and for what? Nedyrene would never know.

He read many books as he grew into a teen, maturing his mind with works from far and wide that came in on the trading caravans that arrived frequently in the market. Spending what little gold he had earned running errands for his father to buy up the scrappy volumes and worn tomes that were sold for very little, toting armfulls with each trip till it seemed his room had become his own personal library. One couldn’t step a foot inside without tripping over the guide books of Volothamp Geddarm or bumping into a stack of poems by Krydle. However, Valyln’s favorite books were the tales of Vajra Valmeyjar the slave who became a duchess.

Sorcere is the School of Wizards, where Valyln spent most of his studies. Males will spend 30 years in study of the arcane arts, learning to channel the strange and unique magic of the drow that emanates from the Underdark. Acceptance as a student at Sorcere is highly coveted by young males as magic is the only path to any kind of real power in their matriarchal world.

Melee Magthere is the School of Fighters. Here males learn the art of swordplay, and individual and group fighting tactics. Beginning students spend their first sixty days unarmed under the instruction of The Master of Lore. Here they are indoctrinated against surface elves and non-drow. This racist propaganda provides a ‘safety valve’- extra aggression can be turned on the surface folk, rather than (completely) on the Drowish hierarchy. Their junior years are very harsh, but conditions improve as they grow older. Students in their 9th and final year serve as guards for Tier Breche, as well as participating in practice patrols within short distances outside of the city cavern. Each year, in order to establish a hierarchy within the class, the Grand Melee is held. During this event the students are set loose in a maze chamber outside the city cavern, wielding simple wooden poles as imitation weapons. The last male standing wins.

In the tenth and final year, fighters will spend their first six months in Sorcere studying magic, and the final six months within Arach-Tinilith learning the precepts of Lolth- most importantly, the inferiority of males in her eyes.

After graduating, Valyln worked under his father in the Councel of Houses, taking notes on the arguments and assemblies that went on in the main chamber. Sometimes things would get heated and he would have to intervene to prevent bloody combat, seemingly able to charm individuals into calming down, which in the Councel, was well needed.

All he had to do was prove his loyalty to Lolth, and his future would be set. He could take his place as a high noble and take the place of his father on the Councel, even more powerful than some of the lower priestesses. Though, Valyln never let it go to his head, and he had yet to know of that trials Lolth had set for him to prove his loyalty.

In truth, he never liked Lolth, she was a thing of evil. A vile and cruel goddess, he thought it perhaps best if she just crawled back to whatever plane of the Abyss she scuttled out of. Not to mention all the spiders, ugh, he hated them. Couldn’t stand the dreadful things, but it was illegal to harm a spider, even accidentally killing one could leave an individual sentenced to death.

Don’t get him started on the slaves, how he despised the lot of them. Not because they were below him, he just couldn’t picture the thought of anyone ever owning another being. He shied away from their sunken gazes, avoided their pleading whispers. What could he do? Messing with them might have gotten him killed more often than not, of the drow were vile beings. There were rarely ever good drow, but Valyln was an acception. He worshipped Eilistraee, which was illegal to do.

When day of trial came and the pillar clock shown bright, Valyln stood outside the temple waiting for the High Priestess, Nedyrene, his older sister. She was graced by Lolth more than any other. Unlike the others obsidian skin, Nedyrene was white skinned and her eyes a pupilless purple. Graced with the keenest of sight and armor as hard as Lolth’s chitin. Nedyrene was accompanied by a priestess in training, small and fumbling with her staff. She was barefoot and wore a baggy burlap dress that suited her poorly, her glowing blue eyes boring into his red ones as he towered over her.

The task was clear to him as he went inside, Nedyrene forcing the Priestess in training onto the table as Lolth stood nearby as she oversaw all trials. Valyln had to sacrifice the young drow to prove his loyalty, looking to Nedyrene, to her smirk, he knew then that it had been her idea. Valyln couldn’t kill another, especially not this small drow.

He refused.. And suffered the consequences.

As he was forced to begin his transformation for his failure he bit back the pain and snatched the priestess from the table, fleeing through Lolth’s den. Never to be seen again in the Underdark. His transformation was long and agonizing, his clothing no longer fitting his figure as he became that of a drider. He came to know the young priestess as, Lilith, and despite her vile temperature towards him they have been almost inseperable ever since.