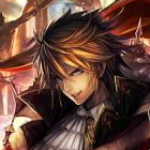 Virgil Threnody is a vampire.

It was the height of the victorian era. Virgil Threnody was a wealthy businessman. His pockets were lined thick with the dollars of his impoverished consumer base. A loan shark, Virgil made his fortune off of the poor, desperate, and financially illiterate. In the years long before government regulation over the limits place upon lenders, Virgil’s practices were just as ruthless as any other predatory lender. He bled people dry, trapping them in an endless cycle of debt repayment. Virgil could have never predicted that he would end up bleeding people dry, quite literally.

One day, he drove one his clients off the deep end. All too desperate to get a sum of money, now, by whatever means necessary, led that client to donate his blood. Little that client knew, the man offering such services had quite the unorthodox method of taking the poor man’s plasma. That client sold much more than his blood to them, but sold his very humanity. The client was afflicted with vampirism. He quickly realized the horrors that come with undead life, and came to the conclusion that his deal was not worth it. The man’s debt had been paid, and Virgil was happily adding more to his fortune, but what the client lost in debt he gained in misery. The client swore revenge upon the man who drove him to sell his humanity- Virgil.

So, one night as Virgil was returning home from a successful day of business the afflicted client set upon Virgil. That night, Virgil’s body wound up in the morgue, drained of all it’s blood. Left unattended upon the slab, Virgil went through the grueling transformation process into a vampire. Awakening from the void of death there in the morgue, Virgil could only think of one thing- to feed. He needed blood, lots of it, and he needed it now. The morgue’s forensic surgeon was his first victim, and then their assistant. At the same time, Virgil’s beloved fiance was signing Virgil’s death certificate, and as she did so moving all Virgil’s assets to the name of her family. In a span of mere minutes Virgil became a dead man, a double murderer, and a pauper all at once.

Virgil desperately tried to reconcile what happened. The first place he went was to his fiance. She was overjoyed to see Virgil, but refused to continue their relationship. She cited the fact that Virgil had changed in ways which she could not cope. His embrace was cold and stiff- there literally was no life to him anymore. Virgil became angered by his fiance’s lack of loyalty to him and in that moment, his thirst took over his actions. Virgil’s beloved fiance died by his hand. He fled the scene never to look back, absolutely harrowed and broken by what he had done.

Virgil had lost everything. His humanity stripped from him, everything that gave his old life meaning destroyed, and harboring guilt from his murders, all drove him into reclusion. Virgil found and old abandoned hotel building. In there, Virgil shuttered himself away from the outside world and there he stayed forever since, only leaving when the need to feed was too great to wait any longer. The world progressed around him as he lives a shut-in life. Meanwhile, Virgil used the privacy of the clocktower to explore his vampire condition. Over the decades left in privacy Virgil came to understand his limits of being a vampire, and the boons being a vampire afforded him. One can still find him there to this day, if anyone were to come looking. 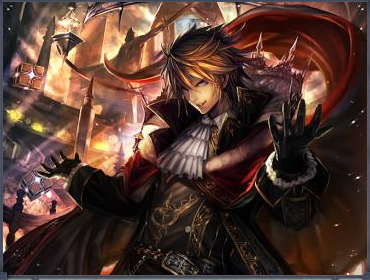 Virgil’s eyes often change color in response to the magic he wields, but their neutral color is red.

Virgil’s true skin color is a ghostly pale when it comes time for him to quench his thirst for blood, but when well-fed his skin-tone is unmistakable from a common Caucasian.

Virgil can not retract his fangs. They are always visible, especially when he speaks.

Virgil dresses himself with high taste. (See photo.) He is resentful to dress in any fashion that is not a callback to the victorian era time from which he is native. Whether or not the innate compulsion to dress in a fancy manner is a side effect of vampirism, or if he is genuinely obsessed with holding onto the sense of riches he had before he was turned is unknown. He uses the excessively large collar of his fancy cloak to conceal the iconic bite mark that scars the right side of his neck.

Virgil’s voice can only be heard to be believed. Virgil’s accent is incredibly sterotypical for a vampire. Virgil’s voice is thick with Romanian accent, and his centuries-old vocabulary produces an extrapolated and obsolete sentence structure. Whether or not these mannerisms are a side effect of being turned into a vampire, or he truly has a Romanian heritage is unknown.

Underneath his clothes, Virgil has an impressive physique. Strangely, it maintains despite Virgil never doing any exercise and using his magic to perform even the most trivial of tasks- to include walking and moving objects. His upper body is built like someone who’s spent a lifetime of doing mountain climbing, producing a set of chest, traps, and arms. They lack the incredible sized that one would find in a power lifter, showing a more toned and low profile build. His lower body is toned in a similar fashion, looking to be built for a natural born runner.

Virgil Threnody boasts many of the strengths and weaknesses that you would expect to find in a vampire.

It is expected to be common knowledge to most characters that a vampire has these weaknesses. If the character has heard the term “Vampire” before, then they should know that a vampire:

Is destroyed by sufficient exposure to sunlight.

Is destroyed by incineration or disintegration.

Is destroyed if caught in running water of volume sufficient to submerge him.

Can be incapacitated instantaneously by a wooden stake through their heart.

Can be incapacitated by a decapitation.

Displays a great aversion to garlic.

Displays a great aversion to holy symbols, objects, and verses.

Displays a great aversion to mirrors. Has no reflection, and does not appear in photographs.

Cannot enter a private home or property without first being welcomed in by someone with welcoming authority.

While Virgil’s thirst for blood has been tempered over time, even the most mature vampires will succumb to the need eventually. Vampires will lose their humanoid appearance (See: Nosferatu) and progressively be driven by animalistic compulsion if deprived of blood for too long.

Virgil is incapable of enjoying most mortal pleasures because of the nature of his undead body. Food and drink bring him no pleasure, for it all tastes as if he had been chewing the same piece of gum for far too long. No heat can warm the stiff flesh and bones that trap his soul in this mortal coil, be it the caress of a lover or the hearth of a fire. The cold that permeates him is to the degree that he cannot even tell the temperature of the room he stands in, and can be felt by others in all of his actions like handshakes and his breath when speaking. Sleep does not come to him either, despite the ever-present fatigue that grips every sinew of muscle he has. All of these facts of undead life bring torment to Virgil.

Virgil Threnody’s maturation as a vampire, and their centuries of study in the mystical arts have afforded Virgil to perform many supernatural and magical abilities, such as:

Mastery of spell craft, giving Virgil the power to bend elements of nature with their willpower, except for those that conflict with his attribute as an undead. Some examples of these conflicts, for instance; healing magic, summoning a torrential downpour of water, and commanding plants or animals other than his familiars.

Deciphering a wide variety of arcane languages and runes.

Can communicate with ethereal beings such as and spirits.

Virgil avoids the practice of black magics because of his moral compass. Despite this, he has a natural affinity for raising and commanding undead, instilling decay in any living flesh at will, and opening portals or communications to the lower planes of existence (Hell/the underworld/the netherrealms/whatever you’d like to call it) and those that reside within it.

Can transform into a bat, and summon swarms of bat familiars.

Can transform into a rat, and summon swarms of rat familiars.

Can transform into a spider, and summon swarms of spider familiars- which are his favorite between rat, bat, or spider.

Can take the form of a plume of smoke.

Can manipulate those with weak wills by mesmerizing them using vampiric charm. This requires continuous eye contact between him and the enthralled.

His fingernails can become razor-sharp claws.

Is an undead, and therefore released from mortal needs such as food and drink, warmth, sleep, etc.

Virgil’s cold undead flesh can feel no pain, at the price of not feeling very much at all.

Immunity to illness or poisoning.

Virgil resents every aspect of his vampiric self. Even the things many would wish upon a star to have, like his body that keeps itself muscular and strong despite never doing any exercise, and the affinity for magic and supernatural. Not having access to basic mortal pleasures like warmth or sleep he finds torturous and unnatural, just like the client who afflicted him. Almost every day, Virgil looks through the cracks of the boarded up windows of his condemned building. Virgil contemplates stepping into the sunlight and letting it’s  judgement cast upon him. Allowing himself to crumble to ash and finally let the nightmare be over. It is here that Virgil’s greatest resentment sets in. Damnation surely awaits Virgil in the afterlife, and the thought of that always turns him away from the sun. The sweet release of death is something that Virgil craves deeply, but whenever the presence of the oblivion approaches self-preservation kicks in once more and cowardice turns Virgil away from eternal peace. He is utterly harrowed and broken in spirit because of the evil things he must do to sustain himself.

Virgil is a heavy procrastinator. Virgil finds it hard to motivate himself to complete tasks beyond those that entertain him. After all, he has all the time in the world. Literally. It is a bad habit, and Virgil will put off almost any activity until the last minute using this logic.