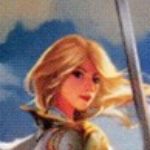 Ariel. Missionary of the goddess Serra, The Benevolent.

The goddess Serra, The Benevolent dedicates her existence to serving humanity, unlike most gods who loathe mortals. But, humans exist in such great numbers across the multiverse that Serra determined she could not properly serve humanity on her own. So Serra created angels to carry out her divine will, and her own plane of existence to be a base of operations which she named Serra’s Sanctum. Serra carefully sculpted each angel out of ivory as a statue, then gave the statue life. Serra bestowed the angels with holy powers, armed them with weapons and armor blessed by herself, and instilled within each angel a set of laws to govern their actions. Serra commanded them to travel the multiverse in search of human suffering and stop it.

Ariel, Missionary of Serra is one of the angels created by Serra. Ever since her creation, Ariel has traveled the multiverse faithfully enacting the will of Serra. Ariel travels the multiverse searching for humans who are in suffering, and uses the divine powers gifted to her by Serra to make things right. Ariel is usually busy slaying evil monsters, banishing plagues, curing the incurable, purging blights, and mending broken hearts.

This is Ariel, pictured dispensing aid to a knight by offering reassurances before a battle.

Pictured here is a closeup of Ariel with her sword, and wearing the garb she would commonly take into battle.

Pictured here is Ariel’s pet alicorn, Regis. He is a horse with the traits of both a unicorn and a pegasus. He is Ariel’s faithful companion that she raised since birth who helps her travel the multiverse much faster than her own wings can take her.

Occasionally Ariel finds herself in universes where technology has proceeded beyond swords. For situations that dictate a firearm, missionaries of Serra were given the one pictured here. A reproduction of the Colt .45 Single Action Army, also known as the “Peacemaker” revolver, selected because this particular model of firearm is universally recognized across human cultures to be a symbol of justice. The revolver issued to the angels of Serra bears craftsmanship of the highest quality, the golden damascene gilding on them and intricate ivory engraving is unique for every angel. They are instilled with divine power, and have many features that make them more formidable than a standard firearm. For example, shooting blasts of divine power that have ballistic qualities more comparable to lasers than regular bullets, and a drum that never needs to be reloaded.

Ariel hates it when people touch her wings, or try to touch her halo!