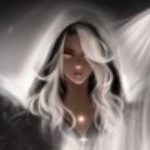 I am Vesta… the Angel of Freedom.

Not in a Relationship

Nobody knows where Vesta came from, not even her. For as long as she can remember, she has always been an Angel. What she does remember is this:

A long time ago, Vesta was captured, enslaved. She was put to work constantly and forced to do things she didn’t want to do. She had no free will. Then, one day, she became so furious towards her captors and about her being captures, that she tore herself free, purely because she had the will to escape. That day she became a beacon of freedom, and vowed to never let others lose their freedom.

Now she Wanders the Multiverse seeking to bring freedom to those who are not free, as an Angel of Freedom.

Radiance of Freedom: A gleaming sword imbued with holy energy, materializes into Vesta’s hand when she wills it to.

Freekeeper: A Silver Hand Cannon with fancy engraving on it. It can shoot either normal bullets, or blasts of Radiant Energy. The name is a pun on “Peacekeeper.”

In Freedom in every way manageable.