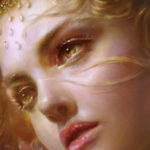 Ruling a hidden realm isn’t easy. especially when that hidden realm is Hyandria. A beautiful  realm where the air is sweet enough to taste, in hues of silver and blue and purple. A place with high mountains full of caverns and hidden springs. A place of valleys and fields and meadows where strange but wonderful creatures live. A (usually) joyful place where no one hates or causes undo drama. A home for a forgotten people who just want to live.

Anasandrya is, like her realm, without time. In her human form she stands 5’6, or there about, with a slender build of perfect proportion of curves. Her skin has a slight bluish tint to it, with a hint of silvery lines of power just beneath the surface. Her long gold-ish red hair is usually kept artfully braided down her back, hanging to her hips.  Her gold eyes swirl with tampered energy which tend to flare brightly for long moments at a time.  Her movements are graceful and smooth and always with purpose.

Hyandrians as a people are sensual beings. It is there nature to seduce and enjoy all the pleasures life has to offer. During all times this nature is controlled and more an undertone of their being, however, every so often there is an alignment of the 13 moons of the realm. During the alignment, there is no control; Hyandrian females will hunt for satisfaction, seducing anyone and everyone they find appealing. The males will take what is wanted, dominating their partners for all they can get. These alignments last from three to five earth days. depending upon the season  in which they come (no pun intended.)

Empress of Hyandria; Wanderer of Realms; Energy-based being