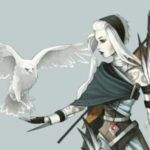 Morgan Fellis, the last of my people

The Fellis Clan had a legend, expertly passed down for generations. On evenings where the entire Clan gathered to eat, there was an appointed story teller. This night’s story teller was the Clan’s Elder. The Elder was a gnarled old man with an equally gnarled walking stick.

“Tonight’s tale is one we all know, a story passed down since the birth of our Clan. The legend of the White Raven.” He coughed before continuing, the children of the Clan gathered around to listen eagerly.

“One hundred years ago…During a time of severe drought, the Fellis Clan began to die off. First starting with the Elders and sickly.“A rattling cough shuddered through the old man’s chest.

“The wise Elders that were still living urged the Clan leader to gather everyone in worship of our guardian, the huge White Raven.” A pause as the croaking of Ravens filled the air. “It seems our guardian approves of this story tonight.” The Clan leader, Isaac says, standing by the Elder.

With a cough and a nod the Elder continues, “It was a few months later, the drought persisted, but…this led to more fervent worship, until…” The Elder coughs  violently and wipes his mouth. “…a child was born, with eyes as dark as the void, and hair as pure as new snow.”

A pause to look towards the night sky, stars shining proudly overhead. “This child was blessed by our guardian with gifts. A knack for weapons, a natural inclination towards magic…potent gifts far stronger than any magic user in the clan… And so the child grew up, using the gifts to revitalize crops and water sources, to keep our people from dying out…”

“And there have been others born with the blessing of the guardian, either in times of violence to protect the clan, or in times of depression. Everytime the Guardian’s Chosen has saved us.” Isaac finishes, smiling at the gathering of his clan.

The Fellis clan was living peacefully, a time of prosperity. But suddenly a child was born, a girl with eyes as dark as the void, hair as pure as fresh snow. There was no violence, no war. There was no famine or death. The current Elders took it as a sign, a warning to prepare for war, to stockpile all the food they had.

“We don’t know what her birth means, just to prepare.” Isaac said, assigning jobs and tasks to everyone, getting the Clan prepared for anything.

Once the girl, Morgan reached the age of five, she began training.

She grew up training, learning all she could before, at the age of ten…

The day was hot, sweltering. Morgan was standing in a field, focusing on her magic as the Isaac watched her, his own magic being the most potent before the young girl was born. “Today we’ll be working with your magic… White Fire” Her eyes widened.

“But it’s already HOT out…sir.” She added hastily, not wanting to use her white hot flames on such a hot day, she was already sweating.

“Exactly my point Mori, you must train yourself to withstand all environments, even when your magic effects the temperature.” The ten year old couldn’t argue against that and obediently called forth the flames.

Her arms felt like pins and needles as the flames covered her hands and forearms, blindingly white and radiating an intense heat. Of course the child was immune to her own flames, but the heat still made her sweat.

With a speed only gained from masterful training, Isaac manipulated the earth. Two boulder sized chunks ripped free from the ground and came hurtling towards the girl.

Morgan was unfazed, raising both hands above her head and projecting her flames, shooting them towards the chunks of earth. The two elements connected just mere feet away, the white hot flames melting the earth away molten droplets flying past her to burn the ground as the remnants of the chunks crashed on either side of her.

“Good, now let us contin-” His voice choked off as he looked behind her, towards the Clan’s village. Smoke billowed, thick and black, as if the very essence of malice burned. “Mori, Quick!” Fear etched plainly on his face as he ran past her. She ran after him, her own panic in her chest.

It was then that the ominous croaking of a raven caught the attention of Mori, her onyx dark eyes scanning the trees as she ran. Finally she spotted a speck of white in the trees. The speck took flight and soared straight to her. “A…A White Raven…” She knew the legends of her Clan, knew the appearance of a White Raven was a dark Omen. It meant she, the Guardian’s Chosen was needed. Her people needed her and she didn’t feel prepared.

The bird followed the two as they ran, Morgan frantic to find her mother and father. But…

It was too late, the village was leveled. House burned to the ground as if the inferno was brought from Hell itself. Clan Fellis stood or kneeled, many injured before armor clad men stood behind them, shackling them together.

“Slavers…” Isaac spoke, already ripping the earth into the air. “Mori… You must fight. We need you.” He said, his eyes soft as he took in her terror. “I know it’s scary. But it’s just us.” He said, hurtling four chunks of Earth at the armor clad men.

So Morgan fought as well, keeping her distance as she shot fireballs at the men. But this wasn’t just a band of Slavers…no it was an army, the lines never seeming to diminish even as Earth crushed them and Flame melted through armor and flesh.

Morgan was tired, her flames shrinking in size as the white raven circled over the village. She needed a chance to rest, regain strength. But the armored men didn’t give her any such chance, keeping her and Isaac away from the shackled Clan as they continued attacking.

Arrows! Arrows rained down towards them, Morgan only barely able to conjure a wall of flames a few feet over her head, burning the arrows to nothing before they could strike her. Isaac wasn’t so lucky, his own magi faltering to only produce a patch earth shield, arrows striking him down. “ISAAC!” The hauntingly harmonious wail of his name filled the air, the entire clan stricken with grief at loss of their leader. Now they only had Morgan, the scared ten year old to save them. But her magic was failing, her flames slowly dimming and cooling.

“These scum aren’t worth this death count.” A dark, malicious voice spoke. He was huge possible seven feet tall and looming over the other men. “Kill them.” As if they anticipated the order, the men slit the throats of the clan with the sicking gurgles of blades rending flesh. Each slit was jagged as the bodies hit the ground, choking on their own blood.

Sweat covered her body as she shot up to a sitting position in her bed, the covers thrown off to the floor. “Damn it…” She groaned and wiped her brow, white strands of hair sticking to her face. “Always… Always the nightmare…” She sighs, feeling shaken as she relived the events that happened twelve years ago. The memories plagued every sleeping moment, striking her with fresh grief every night.

“Arelin, come.” She spoke softly, but the white raven heard her, flying to her and landing on her shoulder. “At least I have you.” She murmured, standing to exit her room and enter the Red Sun Inn. She called Hellifyno her home now, after barely escaping the Army with No Name. 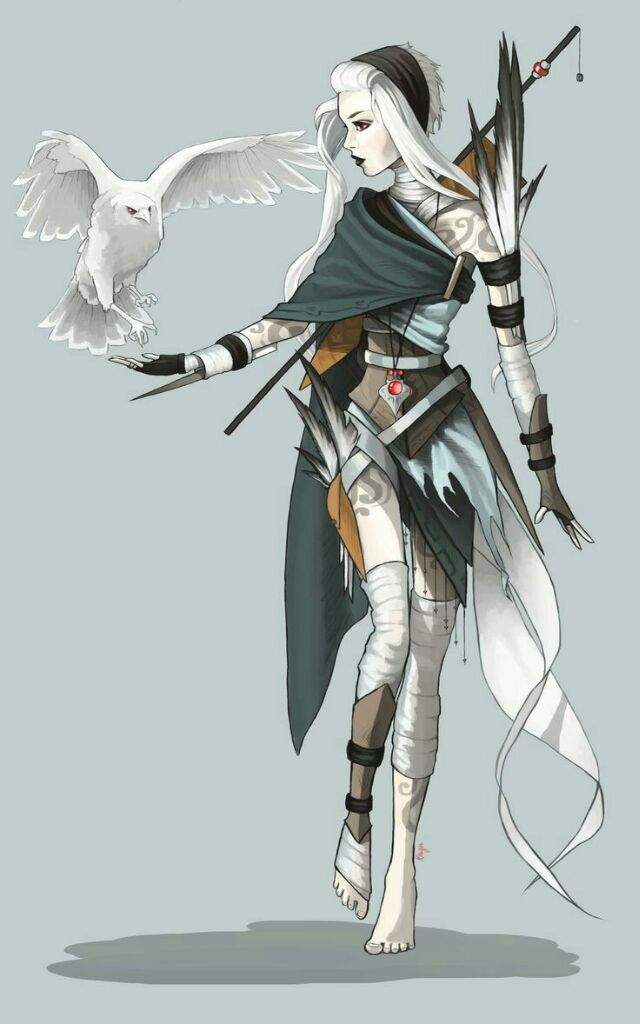 Skin tone: Morgan has a rather pale alabaster complexion

Eyes & Makeup: Her eyes are a deep onyx color, framed by dark kohl. Her lips are painted black.

Tattoos: Starting from her right bicep and stretching across her collar bone down to her left forearm is the first of three gray swirling designs. The second starts on her left hip and ends on her thigh. The final tattoo starts on her right mid thigh, ending at the shin.

Outfit: Morgan has a rather eclectic sense of style, combining different fabrics to make up an outfit.

The basis of this outfit is a light blue cloth wrapped around her torso to fashion an off the shoulder shirt, a smooth brown underbust leather corset. Coming from under the corset is a tattered light blue cloth over a darker fabric with tribal designs along the hem. Attached to her hip on her corset is a long ribbon of white fabric.

She also wears a cloak of a similar fabric to her skirt, this cloak is over the same shoulder as her light blue shirt.

Over both legs she wears the remnants of white thigh high socks, the toes of the left foot cut off while nearly all of the shin of her right sock is cut off and she wears no shoes. On her left shin is a leather guard attached with two black straps.

To finish off the eclectic outfit she has a light brown/burnt orange bag attached to white leather straps hanging beside her left thigh, this back has feathers attached which fade from white to black at the tips. Finally she has similar but larger feathers strapped to her right bicep via two black straps.

Attached to her wrist via a white cloth and a black strap is a sharp and thin blade.

Strapped to her back within easy reach is a thin staff of 5 feet, this staff has two white beads on either end of a bigger red bead fitted to the top, with a final adornment of a square cut of onyx dangling from a thin thread upon the end.