Little is known about how Jana ended up on the island she currently lives on, all she knows is that she has lived there as long as she could remember. She had a somewhat peaceful life despite all the cavemen and dinosaurs roaming around, until a plane crashed in the jungle. After the plane crashed, she protected the TV crew who were in it at the time, but, one-by-one, they were eventually killed off, apart from one, Mike, who turned out to be a DEA agent who was to gather evidence and arrest the others when they got to civilization.Jana, Mike and Togg, Jana’s best friend, eventually found a submarine, but while they were on board, Jana was taken underwater by a giant sea creature. She woke up in an underwater city occupied by Mer-Men, which worshipped something known as The Master. She was imprisoned with Gower, one of the crew men from the submarine who was previously taken. Togg and Mike were able to rescue her and Gower, and helped them escape to the shore. Before they could get to the shore, The Master wrapped one of its tentacles around Jana and pulled her back. Togg went to save her, but was seemingly hypnotised by the creature. Jana tore through the tentacle and used a spear gun to injure, or kill, The Master, allowing them to escape to the shore.

Jana stands at 5’10 spoting a total of 140 IBS of muscles wich gave this beauty a quiet toned yet feminine look. Suiting for a Heroine. Her shoulder long blonde hair and Hazel eyes smiling through the underbush. She was a sight to behold. 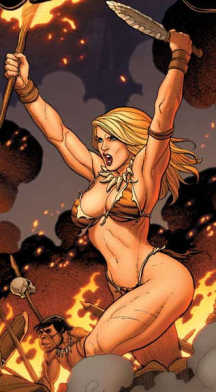 A spear, Vine Rope , Stone shortsword and fitting scabbard.
Her Two piece Jungle Bikini. (A bra and loincloth without panties made out of fur or leather. Tho she often goes topless.) 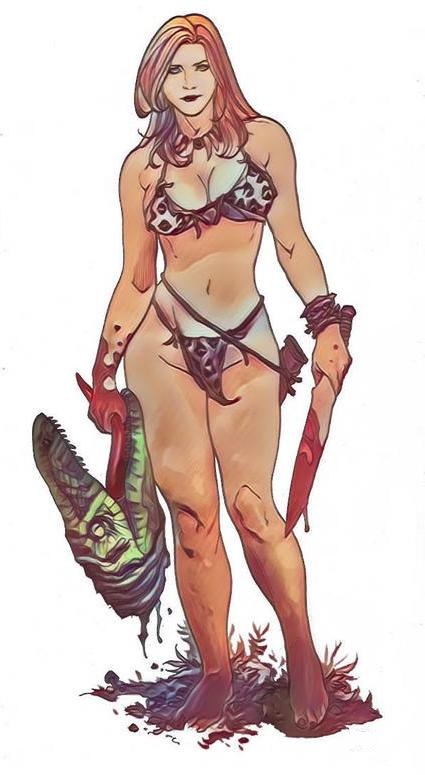 Is incredibly ticklish..especialy on the soles of her always bared feet. (You wouldn’t dare!)
Tends to prop her bare feet up on places regardless of customs. (Goes badly with her ticklishness.)
Has modesty but wears an easily stolen outfit. (If you want to get her attention, have her stop fighting or just want to tease her just steal her bikini and play with the hummiliated herione! )

That i'm the best Heroine ever!