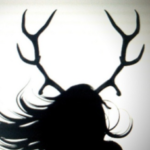 OOC: Please note that Me and the writer of Oaklyn are two different writers. We both have our own separate lives, and our health comes first over the characters and interactions.

“Don’t let it consume you.”

Mother: Who knows, who cares.

Doesn’t understand her own emotions but understand others. Much more open with those she knows.  She tries to respect others boundaries, but doesn’t set many for herself when it comes to conversation, willing to talk about pretty much anything. She doesn’t get all sensitive or flustered well it comes to certain topics either, never really gets offended by others.

(For those that don’t know what a wendigo is: [Most of this will be biased towards Willow] Mythical man-eating creatures that come from the upper parts of northern America and into the lower parts of Canada.

Looks [Two different types of wendigos, animal like or humanoid.]: Animal-like are mostly deer based. They have the possibility of  having fur [normally brown or black], deer skulls on their heads, antlers, glowing eyes, hooves/the hind legs of deers, and sharpish teeth. Humanoid versions can have markings their bodies had before transforming [tattoos, scars, birthmarks, etc.], jagged teeth, normally no hair/fur, and clouded over eyes. They both can have strange [yellow tinted/gray] or natural skin colors, normally very tall and skinny but strong as well, can be hunched over, and can have claws. [Willow is supposed to look more animal-like, she has antlers, red eyes that can glow, but normal colored skin. She is rather short, (the average height, I believe, is 6-8 feet tall) but still unnaturally skinny.]

Creation [Will differ depending on what you read/watch. I also will not be going into too much detail, sorry if the text is flat I guess.]: Humans can or will transform after being bitten by one. Possible signs that you’re turning is an unnaturally craving for human flesh/blood/etc. and a fear of become a cannibal. Other possible signs consist of high levels of greed. When humans let greed control them, they leave themselves open for possession, another way of become a wendigo. Slowly growing craving for human flesh/etc. and slowly going insane from lack, then transforms, and kills mercilessly, never satisfying their hunger. Other wendigos [which are considered a type of demon] are born naturally, not human formed, these would be known as pure bloods.

Personality [Normally, not always however]: Never ending hunger; no matter of how much they eat, they are forever hungry. Very quiet and sneaky, they have amazing sense of smell and hearing; to which the can tune out of if wanted, and can focus on certain ones as well [Such as someone’s scent or heartbeat/breathing.].

(The rest is WIP at the moment.)

Willow Hallows Grove, the “fleshing-eating man killer” as humans like to call me.

Single. "Sorry, but who would want me again?"

They were very poor. Their mother was an elf and left her, her twin, and father to die. Their father took care of them, up until he died. She continues to blame herself for his death in the fire.

He even dealt with the neighbor’s constantly coming over because of their stupid little antics. They pranked everyone they psychically could, except they had to stop when Willow even felt the slightest bit hungry -which was almost always. So most of the times, Willow made the potions, told Oak (Oaklyn) the spells, and Oak would commit the crimes.

They never had much to eat, and with both herself and dad being wendigos, they had to move multiple times -mostly because of the pranks but, sometimes because someone went missing after last being seen in their shack- house, I mean. They tried to eat mostly meat, which satisfied their hunger -but there wasn’t always meat available, which is one reason why Willow took up hunting and fishing.

It paid well and she got to keep any unwanted meat from the animals. As time went on and her name continue to grow throughout the meat industry, some ‘interesting’ buyers wanted her service. They paid her to kill a man for a very high amount of money, and to which she agreed. So in others words, She’s a hunter that is flexible with her prey, and also a witch, and a certified cannibal.

She has two small pets, one being her familiar and the other being an animal she found while wandering around the forest. Her familiar was a snake, a copperhead to be exact. He was fairly well behaved and normally sat, asleep, around his owners neck -not tight enough to hurt her, of course, but tight enough to hold on and not slip. His name was Penny, as her sister and little kids like to call him; His real name is Copper. There will always be a ‘copper’ aspect to him, no matter what form; whether it be the color of the eyes, fur, scales, etc. there will always be that aspect.

And the other was a small, female bat named Crimson. She had a small, garnet colored, silk ribbon tied around its small leg. She was only a baby, so most the time she’d be hanging around of her owners -half sized- antlers, either teething on them, sleeping, or just hanging out. She fed off of Willow, normally fed from her finger (she has many small scars along her hands and fingers from the creature.).

She has another familiar, (Who’s also her friend) named Sarah.

Hmm.. nothings showing up, you’ll just have to find out yourself.

Sage/light green, wavy hair, that’s goes to mid-back. Dark gray alters, which are half the size of normal ones due to a incident involving a car. Garnet (more on the pinker side, and/or a dark coral color) eyes. Pale skin, with a very skinny figure that doesn’t exactly look ‘natural’. Weighing somewhere in between 90-110 pounds.  Around 5’3 in height, which is rather short compared to other wendigos. 20-23 years of age, but can live over a couple hundred (She’s not immortal). Her fingers are dark blood red at the tip and fade out the closer to the base of the hand.

Wears a off-white sweater with the occasional red stain (from wine or blood, we’ll never know!). Because of her figure, it appears rather long, covering her hands, and the collar would barely hang on to her shoulders, revealing a small chain that runs underneath her shirt. It already had a boat neckline, but due to it not being the right size, as well as her small form, it appeared larger. She’d also be wearing an apple red shirt underneath, covering up what the sweater doesn’t, but still showing her collarbone. (Think of Azusa Mukami’s causal outfit from Diabolik Lovers). The chain would lead to a small, metal deer skull that she had snatched from someone in her past. It would lay flat against her chest, considering it was just the skull and not the antlers. She’d also wear dark jeans with similar stains, and scuffed up black boots.

Same light green, wavy hair. Four Clouded over eyes with a bit of pink to them. Light gray skin, with a unnaturally skinny figure that accentuates Willow’s normally figure (In other words, you can see the bones/etc. really easily.). Long, claw-like fingers that faded out into a pink that’s darker than her eyes. Around 6’3, about a foot taller than Willow.

The normally broken, gray antlers would be sharpened, and a beige, more natural color. The corners of it’s mouth are tipped, as well as a few (4) different sized holes along the cheeks/jaw, revealing the rows of shark-like teeth. As well as it’s very lone tongue. Two larger holes were closer to the corners of it’s mouth while two smaller ones sat beside them. The edges would look to be rotten or rotting, as well as be a pink color, the same as it’s fingers. If it wanted to, it could just rip the thin skin that was connecting the areas around it’s mouth. It would allow it to open its jaw much wider, making it easier to attack and feast.

Ceva hunches over a bit when they walk around, but normally crouches over and/or crawls, looking ready to pounce whenever, when scared or ready to attack. (Basically walks and/or travels around like the wendigos from Until Dawn.)

Most, almost all, of her magic abilities are connected in ways. Most of it is based around fire and heat, as well as energy. The color of her magic, or powers, is always red and can either match with her eyes, or be completely different.

They are small creatures, normally mythological. They are red and transparent with golden eyes, and have the ability to move and think on their own free will. When they are hit or when they “die”, they are revealed to be nothing but small petals of different shades of red, or they could turn to red dust of a similar fashion with specks of gold here and there. They take energy to make, even though they are created mostly when the host/Willow isn’t paying attention, when she has energy, they fall apart as petals, as well as more energetic. When she does, they tend to not move far from her and most will disappear once she focuses on something else, they are made of ash.

It’s not that much, or very strong. Most she can do is soothe the pain, stop the bleeding, or make some sort of bandage, or any combination of those.

Her palms will glow a red color, quickly heating up whatever lies in between them. Though that heat is pulled from her own body, using it’s natural heat for whatever purposes she pleased.

I care more than you think; guilt will always be my downfall.

Everyone has a breaking point. Sometimes it’s just harder to find then others.