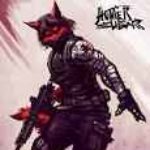 I was born in a abusive household my parents abused me alot..they went even far enough to cut my arm off.. until I killed them while they slept..a few years later I was recruited for a super soldier program