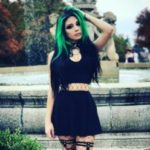 Lilith Williams. Witch of Pain. Koldun’ya boli. Born in 2001 Lilith died birth. But.. that was only her first life. When Lilith died, a three pound baby with an under developed heart, a witch had died that day as well. When a witch dies, their soul searches for another soul, one to cling to, to use their remaining strength to create a new host. This particular witch found the soul of Lilith with little work. She clung to the dead infant, binding them. And when Lilith woke up, she was nineteen, immortal, and able to control the dead.

Odd right? Lilith didnt really know how to control her power. She couldn’t touch anything without it wilting and dying. Those around her, when they touched her they were given unbearable pain. Until one day, the witch within her spoke!

“You must feel the other person.. before they feel you.”

Green orbs widened in shock, and she had dropped the tea kettle she’d had in hand. Panting fearfully, she had screamed, and screamed, shouting obscenities, willing the woman out of her mind.

“O, KHOTITE ETO VAM, DRAMATICHESKAYA SUKA, YA TOL’KO PRICHINA, CHTO VY STOIT ZDES!” She halted at the thick Russian, and took a deep breath. So she was hearing a voice in her head. Brilliant. Gulping once, she whispered,

“Simple.. im you. And im going to teach you how to use that power of yours.”

And so, the witch did. It took a lot of willpower, many Russian curses, and even a few forced, self inflicted slaps. But eventually, Lilith was able to control her odd death power. Now years later, she waits for people to die. Reaping their souls and feeding on their pain. Quite the competition for Scarlett Welsh. Will you be next to be reaped by Lilith?