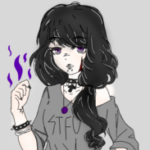 “It’s not bad to dream, but you also have to consider what’s realistic.” – All Might

None of your damn buisness

“Tch. Why should I tell you?”
“…. Okay. Gods. You really wanna know?”
“Well shut your mouth and listen then, sweetheart.”

Karina Vixen Blaire, commonly known as Blaire, is from a place not known to Hellifyno. It was called, Lunixix, a world of witches. In this place, there are different types of witches, Light, Dark, Spellbound, Naturebound, Futurebound, Spirits, etc*. Blaire’s parents, Kitten and Kole, were dark witches. They practiced magic that could kill millions with a tap of the foot, if chosen. But instead of raising Blaire normally, they told her the best way to learn was to be left to starve, almost die. So that’s what they did. Kitten and Kole left her when she was merely seven years old. Blaire learned to take care of herself by stealing and manipulating to get what she wanted. A dirty little thief, pickpocket, scavenger. But there was nothing Blaire could do. She went to school, known as the school’s bad girl. She wouldn’t listen to anyone and frankly, couldn’t care about others. A war between the light and dark witches began when she was around fourteen, causing her to see her parents for the first time in seven years. It wasn’t special, just as if Kitten and Kole were people she didn’t quite know. She hasn’t seen them since that period of time. But they started to make her do unspeakable things, and Blaire grew up with a the thought that killing and hurting others was okay. She has grown with quite the temper, and tends to get frequently annoyed with people.

Blaire quietly started teaching herself what was right and wrong slowly, degrading herself from other dark witches. Around her seventeenth birthday, she came to Hellifnyo, seeking a better life for herself to look for a new person in her own sight. She is currently starting to renew herself and better herself, but there will always be a dark side that never ceases to disappear from her persona. So yeah, that temper of hers definitely sticks along with her natural instinct for kill.

She is an enemy to: “Oh, they’re dead already.”

Blaire usually sports a punk type of look, she tends to wear lots of black, white, and gray. She’ll sometimes wear purple, blue, and red, but it’s not often.

She has an eyebrow piercing above her left eye, and a snake bite piercing under her lip. She is often seen wearing black lipstick or simple gloss. Black, Gray, and White eyeshadow is often paired with her dark clothing, making her deep purple eyes attract attention from many.

Her long black hair reaches her waist, sometimes stuck in a messy bun or ponytail, but often just let loosely on her back.

Her physical appearance as attracted many females and males, making people believe she is bisexual, though she doesn’t define her sexuality.

Another thing, don’t be surprised if a dragon has replaced her. That’s a dark witch trait. They often shift to dragons. Blaire in particular has two forms, a shiny black and gray dragon, and a galaxy purple dragon. Both are equally terrifying and majestic.

Blaire has many burn and scares, she has covered many of them with tattoos, but some still remain. She has a black, withered rose tattoo on her neck next to a patch of her back that has a Raven that is decked in purple fire.

“None of your business honey. Don’t worry about it.”

“Don’t even ask, darling. I won’t tell you unless I trust you. Which, I might add, is unlikely.”

"Everything good has the possiblity of being fake."