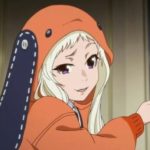 Runa is a member of the student council. She is a leader of the Election Committee who serves as a referee during election gambling matches

Runa is a girl of a very small posture, looking rather youthful in comparison with other members of the Student Council. She possesses quite a light complexion, long platinum blonde hair with short bangs, split in the middle of her forehead and purple eyes. She wears an orange rabbit kigurumi over the Hyakkaou Private Academy issued uniform; a red blazer with black trim lining the cuffs and collar, a white button-up dress shirt, a dark pleated skirt, a tie and white black striped stockings, as well as the academy’s issued footwear, brown-colored loafers with black soles. She has light pink painted fingernails and is often seen with various different lollipops sticking out of her mouth.

Runa comes across as a cheerful, enthusiastic and kinda charismatic individual, especially during public broadcasts. Unlike other members of Student Council, she is seen not taking her role too seriously, being known for eating snacks and playing video games during Student Council’s deliberations, and not caring so much about school’s issues.

However, despite looking friendly and innocent, Runa possess a streak of cruelty and tends to get bored very easily, which may indicate psychopatic tendecies. Her behavior when Midari Ikishima picked out her own eye, and during the match between Mary, Ryota Suzui, Miyo Inbami and Miri Yobami, shows that she very likely has no regards of human life, just like Kirari Momobami, as she seems to enjoy the infamous housepet system. A great example of this is when she humiliated Mary Saotome when she confronted her over the case of her Lifeplan Schedule, telling her that she quickly needs to boost her skills in pleasing men. Nevertheless, fairplay is still extremely important to Runa as she is able to put aside her ideas to keep gambling matches as fair and neutral as possible and any attempt of cheating is completely unacceptable for her.

Runa was just a little girl, always sucking on a lollipop and playing with her toys. However, her father was a compulsive gambler. Her mother was a prostitute, trying to collect any penny for the family. As Runa grew up, she began building psychotic tendencies. With a lack of money and her parents being entirely in debt, she was given no treatment or therapy. Since her mother had left them, it escalated when her father would touch her in uncomfortable ways she didn’t like. One night, Runa couldn’t handle it much longer, so therefore one night, she slaughtered her father’s neck. Leaving him decapitated. He deserved it she thought. She calmly dialed 911 and then frantically cried on the phone, claiming that an intruder had came into the house and slashed him. She then hung up giggling, and simply took off her gloves and threw them into the fire. The police didn’t question the innocent child once, perhaps because she was just a little thing. She inherited her father’s money, it wasn’t much, but she knew about his secret stash behind the bed. She pushed the bed aside and clicked the keys in, and pop! The safe opened, and there was the cash… over more than five million yen. Why didn’t her father pay the bills or use the money to look after his family? Well; he was selfish and only cared about himself. The fat slob deserved to die. And die a million times in hell. She giggled and held the cash into her arms. She outsmarted everyone.

the supposed communication of thoughts or ideas by means other than the known senses.