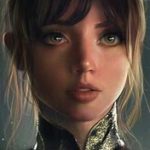 At times when a fake name is need be when approached  by a peasant man on the streets, she usually takes on the alias Thalia Grace after her birth mother Evelyn Grace

Thalia Whitebridge is a young noblewoman of elegance and has a passion for taking long walks around the woods at night. Despite how kind she looks, she maintains a cold-hearted demeanor. Beware; thee has been warned.

She is interested in many people of both genders. It depends on who she meets. However, due to living in the Medieval Times, she keeps her attraction to women a secret.

Thalia Whitebridge was born around October during the foggy autumn season in the Kingdom of Liremeth, which was an important land to roam around due to the alehouse’s and good trade. Ironically enough, the gloomy and cold weather represented how many citizens felt once they found out that she was a product of an affair. Due to this, The Lord of Aelirin was banished from the sacred Kingdom of Trade by the king. It is rumored that Thalia’s birth mother Evelyn Grace seduced William Whitebridge while changing out the linens in his private chambers. Once proved that these said rumors were true by the time Thalia was age four, William had Evelyn executed. Despite not knowing her for quite long, Thalia cherishes her mother by wearing a golden pendant given to her by Evelyn as a child so she can, quote, “Always have a piece of her with me.” However, due to her father being a nobleman, she is still deemed worthy of being  a noblewoman unlike her mum. Because of her beauty -that she inherited  from both sides of the family, according to her grandmother- when visiting the Lord of Rattay at a banquet to celebrate the victory of his Knight Gregor after a duel, she sparked an attraction within him and that night he succeeded in bedding her. Afterward, the two slowly but surely became close with one another, and the rest is unknown history.

Thalia is a young woman with light wavy brunette hair, which is braided for most of the time. Her eyes are hazel, and she has an oval face with fair skin. A few freckles can be found along the bridge of her button nose here and there, and on her chest where the heart is located underneath, a blouse of some sort is typically adorned by a golden heart pendant, a gift she received from early childhood.

A dagger to stab someone with, of course.

Why would someone as Noble as Thalia tell you?

That a villain is a victim whose story is untold.