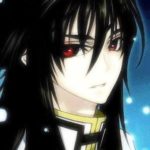 His height is six foot three inches. Has black hair that stops around mid back. His eyes are black with red irises. Normally wears a white jacket with three buckles at the top and a white (trimmed with yellow) button up shirt underneath and black formal pants. Has many different forms, but will use this one the most. He also appears to be around twenty-six years old, but he is much older.