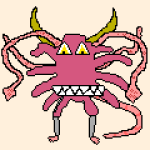 Zero is a false Mishima, created through artificial insemination he has adopted the “Devil Gene” which bestows him great physical force and prowess. Being trained since he first stepped out the tank he has adopted techniques from several different fighting styles to create his own unique style he seems the Yamata N? Or?ch? a style named after the great eight headed serpent, considering the style consists of 8 different martial arts.

Right at 6 foot tall he has blue black hair that stays pulled back into a short and tight ponytail, a few bangs hanging loose as they shoddily cover Amber eyes. There are a few moderate scars across the entire body, mostly only visible upon the chest considering he generally only wear loose fitting hoodies. The pants are black with purple lightning bolts coming down from the belt loops. His power gloves a very reminiscent of his half brother Jim with the exception they are far speaker . He is a very athletic build.

°Custom power gauntlets based upon Jin Kazama’s.
°A set of Katanas he received after completing a training session with Yoshimitsu
°A small locket showing a picture of all the Mishimas excluding himself.
*Three small shatterproof vials each of a different color, one blue, one red, and one purple.

I am capable of activating the Devil Gene on a moment’s notice without needing a trigger, though I cannot control the power that comes forth from it.

That everyone should be seen as equal until primed otherwise.