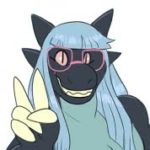 A daughter of Godzilla/anime lover/ cuddler

Unmated as of now..

A few friends here and there.. single as of now..

Ookii is the one surviving female offspring of Godzilla though she was raised by humans when her father was killed she soon developed a caring and loving personality though she’s a bit shy and timid sometimes despite this she has her father’s anger should anyone piss her off she will claw them or scorch them.. literally.. Abilities: since she’s a Spawn of Godzilla she has atomic energy beam or “atomic breath” it lets her expel a large amount of blue radioactive energy capable of scorching anything it hits though it takes a lot out of her..