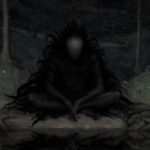 Where darkness lies and evil dwells, humanity tends to lose themselves. They fall to madness and to fear, these actions caused Zyxrn to appear. He took their fears and he took their minds, creating true insanity as they combined. His power grew and took the world by storm, until in half the universe was torn. That was until the clerics came and sealed Zyxrn away in a cave. This is where he resides, watching the world as time he bides. ~Accounts of Zyxrn’s rise to power and his fall. Era 4381, Month of Aeridon, day 43.

Zyxrn, the Lord of Insanity

“I have come across many afflictions in my years as a healer, but never have I seen an affliction of the mind like this. The patient in question shows signs of limited social morals or understanding, they have lost their cohesiveness and intelligence. They ramble and scream about the Insane Lord who will come to free us all from this wretched world of imprisonment. I have no idea what the word “Insane” even means, or if it even existed until they said it, but whoever this Insane Lord is, I have a feeling that they are not going to be our ally. In fact..”

*snap* “I MUST SACRIFICE YOU IN THE NAME OF THE INSANE LORD, ONLY THEN WILL I BE SAVED FROM HIS EXTINCTION OF THE UNWORTHY” The man screamed as he lunged at the healer, pinning him to the ground and wrapping their hands around the healer’s throat before bashing their skull into the cobblestone floor causing blood, shattered bone, and brain matter to scatter across the cold stones. This result was met with a satisfied, crazed laugh from the patient “NOW I AM SAFE FROM HIS MURDEROUS HAND” they yelled before grabbing a knife, placing it blade up on the table and slamming their face onto the blade, causing it to both snap and puncture their brain. The patient then fell to the ground, seizing on the ground as their brain filled with blood before they eventually passed.

The combined blood of the healer and the crazed patient mixed and turned pitch black, churning and bubbling as it rose into a humanoid form before the black faded away. This revealed a violet eyed man with black hair and a black beard that went down to the middle of his chest. “Ah, life has been gifted upon me at long last. I only wondered how long it was going to take before these bipedal fleshbags let their mind fall to the darkness of insanity.” He said with a grin “I have much work to do, and so little time to do it.” With that, Zyxrn left the healer’s home and began causing havoc and insanity in the town.

It had been over a year since Zyxrn had been unleashed into the world, a year of causing insanity and chaos. Half of the world was gone, destroyed by the darkness that enveloped the peoples minds. Zyxrn had gathered enough power through the deaths created by his insanity, that when he reached for the heavens, they ripped in half with an eerie scream that echoed throughout the cosmos before he felt a blast of flame hit him in the shoulder. This drew out a loud growl as he whirled around to face his attackers, a group of four clerics who were determined to seal him away. As the leader of the group, signified by the gold ring around their hood, began to chant a spell, Zyxrn roared and covered his ears as he was backed into a nearby cave “YOU BASTARDS! YOU WON’T SEE THE LAST OF ME, YOU HEAR?!” He roared as he shot out multiple black tendrils while impaled three of the four clerics before causing them to implode, while this would certainly traumatize the leader, they kept chanting until the barrier snapped closed on Zyxrn’s tendrils which caused him to roar in pain, only it was muffled by the magical barrier created specifically to seal him and his infectious words.

Zyxrn grumbled as he threw a pebble at the cavern wall for the 3,421,804,921st time, 922, 923, 924, 925 before… *shwip* the magical barrier disappeared from existence to which caused a loud, happy cackle to emanate from Zyx “AT LAST, THE LAST CHILD OF THOSE CURSED BLOODLINES HAS FINALLY PERISHED. I AM FREE TO SPREAD MY INFLUENCE ACROSS THIS WORLD ONCE MORE!” He bellowed as he shot out of the cave and into the evening air, making a beeline for the first insane person he could sense. This led him to an psych ward’s solitary confinement cell where he watched a man ramble on about a giant sea deity that would lead them all into madness and end the world. It would seem that Zyxrn’s power awoke some of the other mad gods of this realm, which brought a head-enveloping grin to wrap around his head “How wonderful..” He muttered before entering the man’s body and taking full control from him “Sorry friend, but I need this more than you do” He said with a smirk as he then kicked open the door, spraying his black ooze of insanity across the walls before they began releasing a horrid fume that when it penetrated the exposed noses of all the staff and patients, would drive them to true insanity. This led to all of them murdering each other and leaving pools of blood throughout the facility. With his work in this building done, Zyx made his leave through the front doors. He knew they’d have a clean-up crew arrive, and he knew they’d try to weaponize it. All he had to do now was sit and wait.

A limitless supply of nightmares and insanity creating ooze.

I have none! Secrets are for mortals, and it’s oh so fun to watch secrets tear mortals apart from each other.

Torture is so much fun…. on both ends.