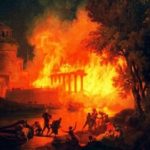 Approximately three months have passed since the first meteors illuminated the sky. Hundreds of gargantuan slabs of blazing crimson rock, cascading over the Earth like Hellish rain. They bled into the horizon and set it ablaze, burning the forests to cinders and flattening entire settlements. For weeks after, seismic earthquakes shook the world to its core. Volcanoes long deemed dormant, erupted violently! Floods, ash clouds and raging storms all took their turns ravaging the four corners of Ardenia. It was the beginning of The End…

As the Cataclysmic dust settled, the survivors of the world’s fragmented nations and ruined Kingdoms, desperately sought to salvage the devastated remnants of their lives.

But millions of the dead had begun to rise…

Humans, orcs, elves and dwarves…few, if any of Ardenia’s countless creatures and races were spared the curse that saw them reanimate into ravenous monsters. Their eyes turned red as blood. Tireless, insatiable, they hunted at all hours, forming roaming hordes of mindless zombies. Perpetually hungering for flesh and extreme violence, the hordes overran most of the towns and cities. Multiplying and spreading over the globe like an unstoppable plague, they consumed or butchered every living thing in their path. Civilisation as it was known broke down. Societies fallen, families ripped apart. Reality had become a living nightmare.

Yet there were those who survived…those who evaded and fought the endless hordes, scratching a desperate living from the dying ashes of what once was.

These are their stories.

(Please note: This is a medieval fantasy world, so no guns, cars or advanced technology.)

This topic has 17 replies, 3 voices, and was last updated 2 years, 5 months ago by