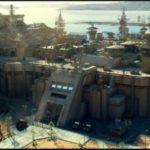 A new primary base of operations for Specter. The last one was destroyed during the events of Ape Escape 2, so improvements have been made.

Here, Instead of the usual monkeys messing around, the player is given monkeys equipped with weapons like Laser Pistols, Laser Beams Rifles, L.O.V.E Ray Guns and Military Issue Black Market Weapons.

Including:
RPG-7s, Mac-10 Uzis, And some forms of rifles and shotguns like Rimmington 22s, Combat Rifles, AKA-47s and even Long Double Barrel Pump-Action Shotguns, and the monkeys usually wear a mix of military fatigues from both Ape Escape 2 And 3.

It is also the location of the famous
“S.A.R.U 8: Specters Elite Gonna Getcha, Top Minion! Guards”

They are the commanding bosses here, who have a special home at the top of the base’s tower.

There are also a notable amount of advanced military vehicles and helicopters/aerial transports here.

Code C.H.I.M.P. Is rather huge seeing as how it has an elevator that stretches all the way up into the sky.

Specter supposedly build his MK:II Battlecruiser here before it’s destruction, but has a new one in construction called the MK:III and is like a flying mobile HQ, similar to The Avenger’s Flying Base.

His base is the most technologically advanced of the other factions, and is located to the eastern-left of the Island.

Players who join this faction are rewarded with advanced tech to keep and can freely visit and interact with Specter, his Code C.H.I.M.P Guards, or even The S.A.R.U 8 themselfs.

((Only at certain times is the base visitable from MON, WEDS, FRI, and SAT.))

(( This faction is still open to the public for anybody to visit on THOSE certain days, or special holidays where it’s open all day..))

((But be warned, this is the most advanced of the factions, and security cameras watch your every move linked to alarms and other fatal military traps for those who wish to steal or trespass..))

((Even sometimes a S.A.R.U 8 Minion will be patrolling with his elite guards.)) ((You have been warned.))

This forum is empty.

You must be logged in to create new topics.