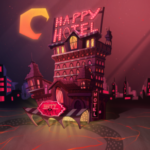 The Hazbin Hotel’s exterior is a tall, elaborate amalgamation of arched windows and turrets, one of which seems to be broken. It appears to be at least seven stories tall, with at least five of which being guest floors.
Three signs are displayed outside of the hotel: One atop the entrance reminiscent of the Hazbin Hotel logo, a large pink one atop the building with the hotel’s name in lights, and a neon ‘HOTEL’ sign at the bottom right.

The hotel’s interior is shown to be in a state of disrepair, with wooden boards covering shattered windows, signs warning of asbestos, bloodied tools left lying around, and paintings are shown hanging off the walls. However, the overall theme of the building remains ornate and regal, with stained glass windows, lavish furniture, and generous usage of gold. Like the rest of Hell, the hotel has a red color scheme.

The Caviar Bar uses skeletons, snakes, and bones as general themes, along with card suits and candles, and advertises itself as a casino. Though the sign is cut off in the shot, the word ‘concierge’ can be presumed to be shown above the bar, and Alastor calls it the front desk when talking to Husk, suggesting that it is also the check-in counter.

There are many apple and circus motifs throughout the hotel’s interior, in reference to the Magne family, or, more specifically, Lucifer. Eyes are also a recurring theme throughout the building, appearing on the frame of almost every single painting.