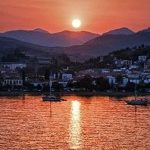 Lemnos is a Greek island in the northern part of the Aegian sea and is known to be Hypnos’ dream islands where he lives and stays when he isn’t sharing the cave in the Underworld with his twin, Thanatos. These islands used to be a refuge for Hephaestus and has his forge.

The cave is located in the Underworld and the river Lethe (Forgetfulness) runs through it. Poppies and other hypnotic plants grow at its entrance. The twins, Thanatos and Hypnos share this place as their home. In Hypnos’ room, there lay a bed made of ebony and no sound nor light can enter his grotto.

Both places are sanctuaries of peace unless stated otherwise by either of the twins.

The cave of Death and Sleep…

This topic has 1 reply, 2 voices, and was last updated 2 months, 1 week ago by