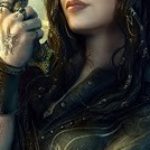 Melcosia is situated in a secluded area, surrounded by spruce and pine trees, nestled somewhere in a forest nearby a running brook. The school isn’t too big nor very small either as it was build using branches from trees to produce an old-fashioned kind of building to show just how long it’s been standing all these years. To the southeast from here is a small town with shops as well as a residential area where only the townspeople can call Melcosia Town their home. There is a library, a cafe, some restaurants, and a few museums. This school welcomes humans who look for improvement in their life. Are you looking to look at the inner you with a mirror? Show that you have the heart of a soldier or knight with weaponry or defend someone with armor? Remember that one of Melcosia’s many magical tools tells who you are both spiritually, mentally, and physically so in a way they should be the connection you have sought for so long. Who knows that someday you will lead an army of whatever tool you chose. One who possesses a mirror would lead others who chosen one also, but each mirror has its own drawbacks once taken into possession of its rightful owner. When a student has learned to control the power of their magical item they get smarter, wiser, as well as bonding with it. Students will take classes that pertain to the item chosen by special instructors in the ways of tool usage. Eventually, you will be able to summon that tool without having to hold it all the time like I do with my shape-changing hand mirror. There is a compartment that I have opened in between me and that place known as an Ether that only I can access so no one will steal my tool nor use for evil purposes, but on the contrary no one else cannot do so unless the owner is recognized since the tool only listens to whoever has possessed for that long. An incantation must be spoken made by the student’s own words or get aid from another whose skills are in writing what to say. Also, the more of the same tool that student has when combined together as soon as a leader has been selected to lead only those with the same items then there suppose to be a secret when doing so, none knows this other than the headmasters who is in charge with that tool’s division. As for me, I am the headmaster of mirrors. Any headmaster can choose which division they’ll lead with their students of a different tool. Melcosia is seeking faculty and headmasters. If you would like to join, be sure to fill out the form that came with your acceptance letter as well as the ticket. There is a medium-sized, manilla envelope with a map of the campus.

Form
Headmaster, Faculty, Student
If Headmaster what division within this Academy would you like to lead? (You may not choose mirror hall, however, Faculty is welcomed to teach in courses within the hall)

Faculty can select academic or special courses (They also get a magical item, headmasters automatically are well equipped with it so they have their own incantations)

Student Form
Name-
Age-
Gender-
Item (Mirror, Armor, Clothing etc) -May come up with your own which will be added to the magic items list if not available-

Pob(Place of Birth)-
Birthdate-
Hometown-
Dorm, Town, or House(House is more of a grouping for students who want to be close to those sharing their item choice. The House of Mirrors is lead by Ixchel while others await a headmaster leading the others )

Character Description/Portrait(what do they look like?) -This is also optional, giving a clear descriptive post instead. It’s helpful, however, to let others see what their char looks like to increase chances unless the player can get a good image in their head of the intro to the character-

Chars(The max is 5. This is empty unless you choose to fill out again for a secondary char, must not be the same char with the same item. Must choose another item and division with alt chars)

Headmaster Form
Name-
Age(Must be at least 30 or more before applying for such position)
Gender-
Birthdate-
PoB(Place of Birth)
Hometown-
Division(Clothing, Armor, Weaponry etc) -May choose your own to add to the list if not available. You’ll also lead the House other than the division where students live together in their own rooms they choose themselves. House aides are faculty members who are under the House leader via headmaster of their division along with their own faculty under them)

Chars(may have 3 headmasters in command, this is empty with first char so it does not apply unless you decide you want a secondary headmaster if you can take up the responsibilities that is)

Background(Optional)
Description/Pic(Optional)
Academia/Activities in Division(List all academics, activities etc) -The headmaster is in charge with the students courses based on the magical item they chose, he or she may ask questions to your decision. They also have their own rules within their division)