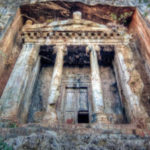 this is the final resting place and home of dragon priest, or as most call him simply priest, it is well hidden and overgrown,the stonework is crumbling as cracked but still holding strong,it has lay undisturbed for thousands of years and holds riches and knowledge untold,but be warned if you choose to try to loot the tomb be ready to face what might lie within,the traps are deadly and the guardians even more so, but what may kill you the quickest is the allies and friends of the master of the tomb,but should you make it past all that and get to the inner sanctum you may face the master of the tomb,the priest that was buried their,he is a powerfull enemie,but an even more powerfull allie,however you choose to try to deal with him power riches and glory may be yours,however the longer you stay the less you may want to leave,

This topic has 2 replies, 2 voices, and was last updated 1 year, 5 months ago by