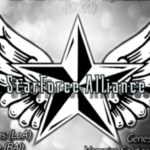 Hello! Welcome to the Strategic Teams of Aligned Reinforcements Alliance – the StarForce Alliance! This establishment was founded on June 14th, 1939.