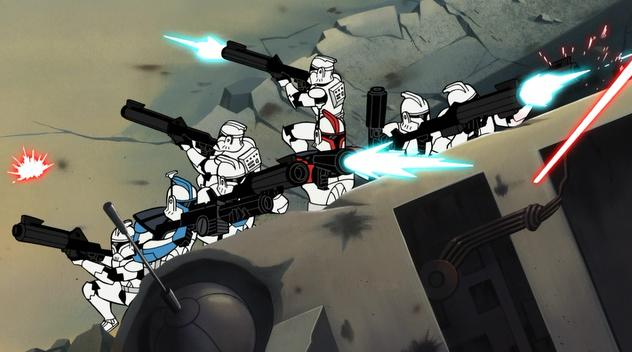 It feels like it’s been years sense we’ve been in contact with the Republic. We’ve been trapped on this planet that we’ve been told is called ‘Hellifyno’ for weeks now. To make things worse, our scanners haven’t even picked up anything that somewhat resembles our galaxy. Lucky us, the people here were kind enough to let us land our Venator so we can refuel… Only problem now is where do we go? The people here, how ever kind, don’t trust us. Some part of me even says they might try and kill us… Captain Vin, the one in command as the admiral has died of old age, doesn’t think they will. He thinks that everything is all nice and peaceful, that diplomacy will find it’s way in. I doubt it. Going off these peoples reaction to the very fact that we are off worlders doesn’t make me all too happy. Hah, I wonder how they’ll react when they find out we’re the best the Republic has to offer…

The bridge of the Venator is empty. Not even a peep dared to challenge the silence. The only actual sound were the sounds of terminals. At the window of the bridge, looking outwards to the clones outside, all making either quick adjustments to their massive Venator class Star Destroyer or simply trying to find a good place outside the ship to rest, is Clone Captain Vin. His armor the same old blue and white as his fellow brothers of the five hundred and first, only differences are the shoulder padding, the bomb resistant leg cloak (Like a skirt- only the front is cut off and the thing has some serious blast resistance.) On his chest plate, to the left, in a deep blue color, is the Republic symbol.

Silence remains as the Clone accesses the situation.. This isn’t like being on the battlefield against some droids with the main task of destroying them- No, this is much more.. Diplomatic. Hell, Vin would rather go against two spider walkers, 5 AAT’s, and three hailfire tanks equipped with nothing but a DC-15S and a Thermal Detonator. Funny.. He’d like to see where that would go.

After a few moments… He hears an explosion from the cargo bay.

He’s instantly turned around and is already trying to come into contact with the people in the cargo bay.. “Cargo, report, Cargo. Report immediately.” A voice would come through, strained, but it comes through.. “Droids.. They’ve managed to… Agh… Managed to hitch a ride… ACK!” And then static.. “Blasted..” Vin rushes to the lift, Dc-15A at hand, and keeps his rifle aimed at the door.. Once it opens, he starts a quick and light pace to the hangar. If the clankers have been here the whole time, that’s where they will go to get out… He hopes his troops can keep them in.

It seemed so unlikely that something like this would happen.. The Droids are everywhere. Vin’s voice would break through the coms.. “Do not under any circumstances let the droids escape! Clear them out immediately!”

Blight, one of the few clones enjoying this, keeps a Z-26 rotary cannon at hand… Blasting down droid after droid. “YEAAAHH!!” The excitement in his voice manages to boost the moral… Thankfully. If the droids keep up what they’ve got going, how ever, they’d be able to take the whole ship… Something Vin was NOT Gonna let happen.

Around 4 destroyer droids rolled into battle, each one simultaneously stopping to open their shields. The droids open fire, leading a slow and steady charge into the 501st… They would be met by an LAAT gunning them down.

They kept their charge. Do the droids know they’re going to lose? Or do they just lack the ability to cancel charge? As both sides begin to press, it becomes clear the droids have lost.

Vida, one of he few medics of the crew, is too busy attending to a wounded clone behind some crates behind enemy lines… Vida was still new to the 501st, and as such, was completely caught off guard by this whole situation… His actions were close to panicking.. And he was ninety percent sure there was a destroyer droid creeping it’s way to him… He glances behind him… and…

Is left to witness Clone Captain Vin jump atop the destroyer droid, before the droid’s shields activated, and plant a Thermal Detonator on the droid… Doing a quick dive forward, followed by a roll, the explosion of the droid, and the Clone Captain gunning down more droids…

By the end, the 501st only suffered a total of 55 casualties out of a crew of 2,000 men. Captain Vin personally made sure the clones who’s lives were lost were kept in containment and left alone. As for the droid parts, they’d be scrapped and used for the 501st own intentions. The hanger has suffered minimal damage, how ever, the cargo bay had been blown to bits. Parts of it exposed to the outside… Lucky them no droid managed to escape…