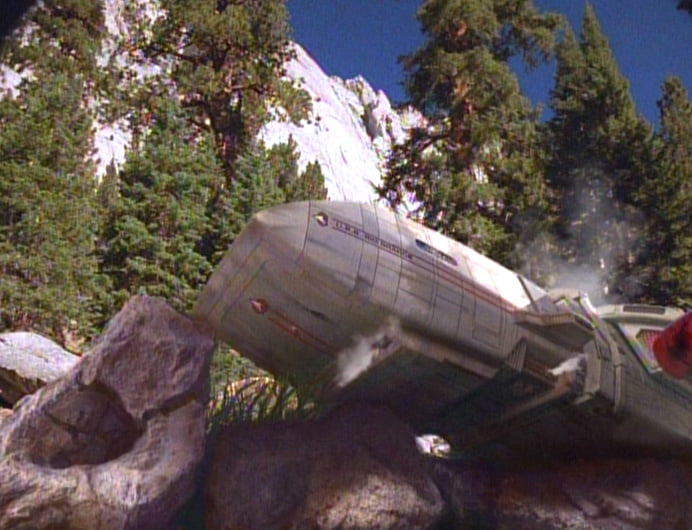 Eight miles above the planet and placed into a fixed orbit that followed the shadow of the second moon, it was possible to see the bright curvature of that single satellite about the star that gave it warmth and light and the energy of the wind, burning it’s hydrogen in a maelstrom of undetectable neutrino storms that would bounce ineffectively against the skin of Hellifyno’s ionosphere.

With the filters activated, Torres would sit, arms folded behind her head and watch the cascades and projections, the spurs that would cause the solar winds that would, under any other circumstance, batter that little craft- the runabout USS Okavango, but the flight path pre-programmed into the computer would have her rising and falling, surfing the ionosphere, redolent of the ancient sailing ships of Earth’s history upon the peaks and troughs of deep ocean waves.

The computer suddenly bleeps into life as the Ensign reclines back in the pilot’s seat and watches the sun’s dance, mesmerized.

Torres jerks from her reverie, sitting upright and reaching for the controls.

The deck illumination went from daylight to dimmed close to twilight and flashed three times. Torres’ hands flew over the controls, bringing up the screen that would indeed show the electronic representation of this unidentified object coming in fast.

“ETI?” pressing the tabs that would give her manual control.

The engines fire up and jolt her forward. More tabs and she brings up the stereographic projection of Hellifyno with it’s landmass and oceans picked out in colors of black and blue.

The air turned as blue as that map as Torres swears like the sailors of old and dips the nose of the runabout. She turns about, having to skim through the curve of that charged sphere or risk overheating the ceramic skin of the vessel.

Suddenly a bang that shakes the whole ship and the computer goes dead, power is lost and the runabout is suddenly in freefall, spinning through the atmosphere with Torres screaming at the top of her lungs as she tries to both manually steer and restart the engines and wishing at that moment that she had a co pilot.

“Come on! Come On!” Torres roars, as she is flung about the seat, the whole ship shudders as she desperately attempts another restart by aligning injector ports and starting to pray.

With life support failing, it was suddenly very dark and very cold and she was moving by instinct and the flashing strobe of the star as it moves across the filtered screens from port to starboard to darkness and repeats. Once more, the air turns thick with expletive until suddenly the life support firs back into life, the lights come on and the computer runs through a reboot that she knows would take at least 22 seconds.

Would she have the time or would she had to bring this hulk in under manual control?

Whatever it was- she was coming in hot.

The drive engines once more growl into life but goddamn it they sound unhealthy. She forces levers back into position, though it is a struggle.

“Work with me you bitch!” screaming at the vessel as she hears the shield plates overheating and peeling off, rattling against the bulkheads sounding like klingon dice in a romulan skull.

With another sickening jolt she shoots forward and manages to stabilize the spin but she is dropping like a rock and shedding detritus that seen from the planet’s surface would appear a glowing heavenly body, streaking across the sky with a tail of fire caused by extreme heat as the air thickens and the molecules create a friction that would have the vessel steaming and close to breaking apart.

It was luck, skill and the remembered lessons of Starfleet Academy that would have her seeking the most likely place to put down. The engines were working,- barely- but her trajectory was off. She was coming in too fast, too acute and too low to make any further adjustments.

The computer wasn’t talking to her and neither was the ship.

It was all she could do to point it roughly at a water mass and hope the angle of impact would be enough to skim it as she had the scintillation of the ionosphere. And she did, skimming like a stone, walls of water spraying up behind her as it reduces her speed without sending her nose first into the depths and breaking up into a million pieces.

A bounce as energy forces her back into the air into another bright arc. More walls of water. Another bounce, reminiscent of when she and her friends at the academy would skim stones over the surface of the artificial lake.

Three, four more times until sufficiently reduced that she slams into a hard reverse but with no more water, and the banks of that lake approaching fast, the nose impacts and is thrust upwards, before the scraping and grinding ceases and the runnabout comes to a silent and steaming halt, about half a kilometer from the lake in amongst a forest of splintered and broken pines.

Torres is thrown across the controls. She might have been an excellent flyer in the flight sim but she had quite forgotten the fundamentals of safety and had left the harness hanging slackly from the pilot’s position. The laws of physics change for no man, no woman either and the foetally curled body of Torres slams into the screens with the force of the full stop.

There was darkness, and the faint hissing and rhythmic clicking of the fast cooling craft as tortured metal and the protective skin return to it’s original remembered form. Anyone that had been on the surface at the time, watching the crazed careening of this star that seemed to fall from the sky would see the deep furrow that it had carved through the land, through the stands of trees that had both assisted it in slowing down, and torn components from it’s fat form that were strewn behind it like a bride’s train.

Torres was out for only a minute, before finding herself wedged between the pilot’s position and the casing of the controls panel upon awaking, her head pounding, pissing blood from a scalp wound in the same way the engines were losing deuterium to the extent it was obscuring her vision and the cabin heating up as thermal mass was inverted into the space, she groaned and attempted to move.

Relief that she could, though she still wasn’t sure whether she was up, down or sideways and the sickening crunch and grind of what felt like a broken wrist, the flashing burn around her side of broken ribs that threatened to take her breath away, but it did not, and she did breath, though shallow and with caution.

It is strange what one thinks of when one is hurtling through an atmosphere at near terminal velocity. The drone of the voice of Professor Surek- the Vulcan physicist as he explains the equations associated with this phenomenon.

“Net force equals drag minus weight” she could hear the thin and reedy waver of the elderly gray haired Vulcan replaying in her memories as clear as though she was receiving that lesson in the here and now.

“9.8 metres per second you bastard!” she replies with a croaky chuckle as she gingerly wiggles her body from where it is caught against the controls casing, holding her injured hand close to her chest.

It hurts to breath, it hurts to move, but if she doesn’t get up soon, she would happily lay back and die slowly, cooked within the ever increasing heat of the cabin.

Pain burns across her chest with each rasping gasp and she eventually manages to sit up, leaning heavily against the same casing that probably saved her life.

“Computer” she croaks. “Status” She can still hear the whirr of it’s power source from deep within the panel and half expects it to respond in the voice of Professor Surek, thin and very proper

This thought brings a laugh, which brings more pain.

“Status critical” returns the electronic female voice of the ships computer. “Advise abandon ship” as the engines power down automatically and the lights flicker into darkness. “You don’t say” Torres mutters sarcastically.

There is a pounding upon the hatch. The eletrics are out, the cabin is heating up. Torres has managed to extricate the medical tricorder from where it was stowed and grips it with her good arm while her boots pound upon the hatch to try and open the damn thing.

Torres doesn’t notice the grind of the external shafts outside. She is more concerned with the acrid frying of electrics and the cabin starting to fill with smoke and the stench of shorting circuits and ozone.

“Goddamnit you stubborn bitch!” she cries, scooting closer to the hatch on her rump and bringing back her boots to slam them into the corner just as the hatch open and dayligjht enters the cramped and ruined space.

Starfleet Issue boots make contact with whatever is behind the hatch and the battered and bloody form of Ensign Torres rolls out of the craft to thud upon the floor, wearing regulation security crimson, gripping a tricorder and hacking her lungs up as she tries to recover a gasp.

One hell of an away team!