Home A Brief Review of the Hellifynian Solar System

A Brief Review of the Hellifynian Solar System 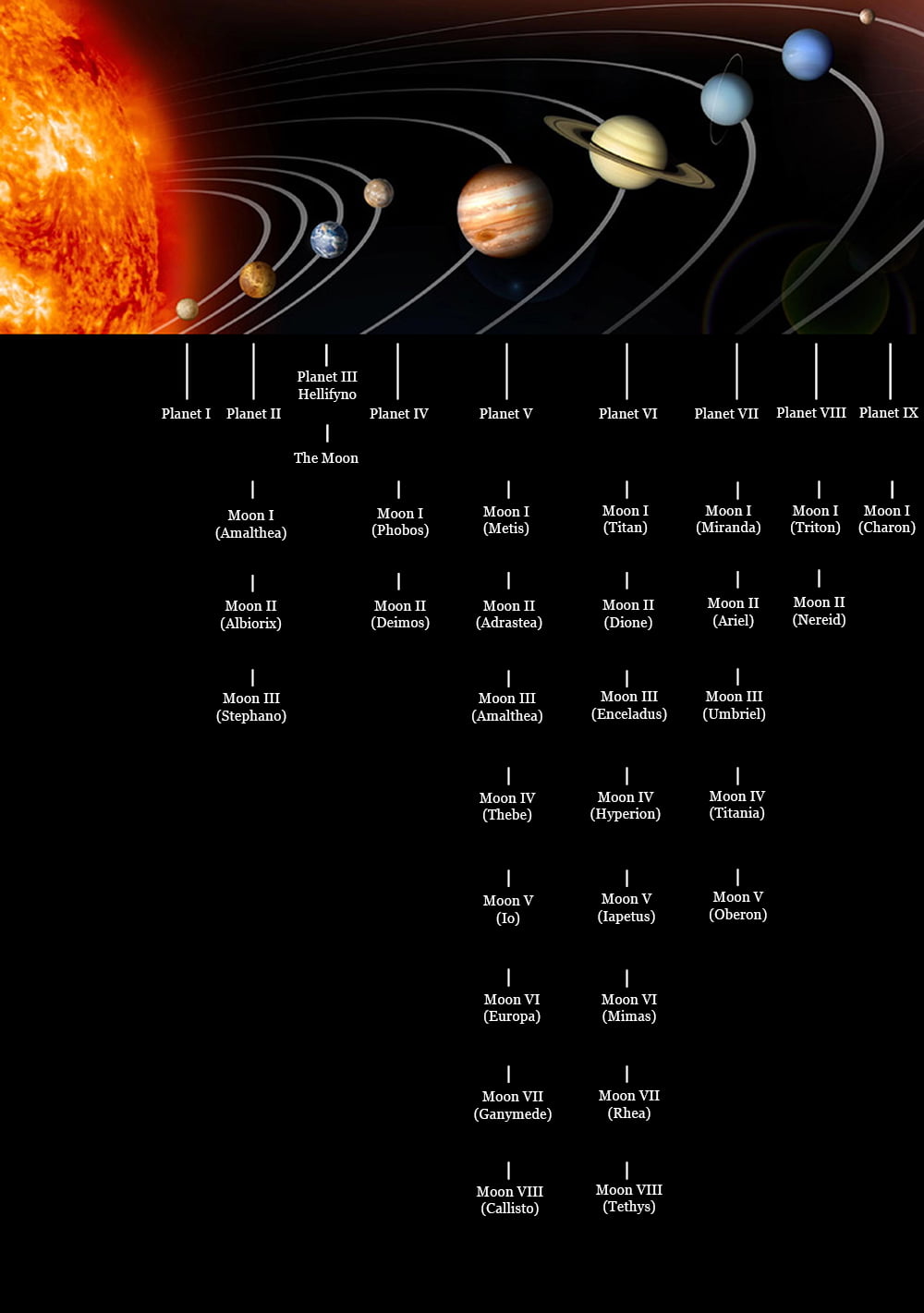 The Sun
This nearly perfect sphere of hot plasma, flames, and magic, rests at the center of the solar system providing an enormous quantity of magic to the various planets and moons in residence. This is a place of flame demons, phoenixes and fiery beasts, as well as turbulent and explosive forces that are not largely understood. However, magical means can be used to travel through and even to the center of the sun. And if you do reach that location, a door can be found which leads directly to the Infinite Hells.

Planet I
(Mercury)
This mostly metallic planet does not have an atmosphere, and therefore is host to very little organic life. However, there are mindless mechanical beasts that cover the land, creatures of iron and bronze, steel and copper, and other amalgamations of metallic origin that creep and crawl mindlessly across its surface.

This planet is only even vaguely habitable right at the edges of the line between day and night. Other regions are scorched or frozen beyond the limits of most endurance. However, this planet does offer tempting mining prospects to those who are willing and able to deal with the harsh conditions and savage creatures.

Planet II
(Venus)
This is a world covered in thick swamps with gaseous clouds that burst in violent explosions, raining heavy plumes of magically tainted smoke and dust down upon the world only to have it billow back up in burping bubbles of swampy hurl. This process spreads the chemical compositions that the planet is known for.

In most organic creatures, these substances have an intoxicating effect, causing delirium, ecstasy, and hallucinations, often associated with amorous feelings. It is said that the very air of Planet II is a potent love potion, that can incite lust and desire in even the most reluctant of partners.

Planet III
Hellifyno
The center of all supernatural powers in the many multiverses, Hellifyno is the only planet in the solar system that is known to have generated and attracted sentient life. A potent source of both magical and physical energies, it is a land that defies logic, and one which has been embroiled in battles and conflicts that have had long-lasting consequences for all of reality.

Hellifyno enjoys a sizeable moon that provides a sense of balance to the volatile energies of the planet. A defense base has been built on this moon, several times in recent years, although it currently lies abandoned since World War Hellifyno.

Hellifyno also has a number of satellites, both magical and mechanical, which orbit the planet, owned and operated by individuals, collectives, and city states, with no one entity owning the orbit of the planet.


Planet IV
(Mars)
The red planet of the Hellyfinian solar system is a place that is covered in abandoned ruins. Great buildings, arenas, coliseums, and other places of conflict and contest can be seen across the entire world. However, nobody knows where they came from, or what culture might have produced these marvels. And now, centuries or even millennia unused, these great buildings of sport and wager are crumbling, falling, and decaying into the dusty soil of this planet.

The two moons of Planet IV are quite small. However, they occasionally have a proclivity to turn into anthropomorphized moon-sized space beasts that chase one another in violent conflict around the orbit of the world.


The Asteroid Belt
This is a realm of space that has billions of asteroids of various sizes and compositions. This provides an excellent source of both mining and harvesting, but also colonization, as the largest of these materials are the size of small moons. However, colonists will have to choose their homes carefully, as some of these asteroids have a tendency to exert a violent will, crashing themselves both into other meteors, and into anything they deem to be living creatures. That makes this a realm of possibility, and peril.

In a relatively quiet part of the asteroid belt, there is a restaurant and refueling station that was set up eons ago. It is entirely automated, and operates seemingly devoid of any intelligence, merely serving customers as they come and then bidding them adieu with mechanical efficiency.

Planet V
(Jupiter)
This is by far the largest planet in the Hellifynian solar system, although it doesn’t actually consist of any solid land. Instead, it is endless layers of gasses of many different substances and properties, all layered upon one another and swirling in striating structures that can move you from a realm of nightmares into a field of perfumed petunias in a matter of minutes.

Living in the great gasping gas of this planet are giant monstrous flying creatures, that roar in rage and battle the winds and one another, searching through the haunted storms for the energies that sustain them

This planet also has a multitude of moons, including 8 larger, major land masses many of which do have solid foundations of land and ground.

Planet VI
(Saturn)
Planet VI is a land of many different biomes and climates. There are wasting deserts, lush savannahs, gasping gas clouds and places where color or form start to break down. Within these different environments, very disparate creatures have arisen. From tiny angel like animals to massive lizards that breath noxious fumes, and sound beasts that only exist as notes on the air, it is a place of vast diversity and ever-changing nature.

This planet is noted for the many rings of materials that swirl around its orbit in a disc-like shape. These are thought to be mystical in nature, a form of spell or working that fuels the diversity and change of the world, infusing it with a magical force that gives rise to the many climates and creatures that inhabit its surface.

Planet VII
(Uranus)
Planet VII is a strange and dangerous tropical paradise. A massive planet, it is covered almost entirely in a water-like liquid that flows blue and beautiful but is incredibly poisonous to ingest. Breaking these long vistas of azure are periodic islands of rocky outcrop, some made of metal, others of gold or bones, others of pure energy, or coagulated colors.

Meanwhile, the atmosphere of this planet is extremely volatile, with thick gas clouds giving rise to enormous geyser-like bursts of energy and material that periodically explode outwards into the sky. This creates a perfect resonance factor that effectively cuts out the ability of scanners and scryers to view this world properly, making it the perfect haven for those on the wrong side of morality. As such, a strong culture of space pirates has built up around here, formed from the castaway and unwanted forgotten citizens of Hellifyno, who have taken to the stars to find a new and more nefarious means of making a living wage.

Planet VIII
(Neptune)
Another massive gas giant, this world too boasts a solid foundation beneath the endless clouds. Here you can see the ruins of ancient, highly advanced civilizations. There are marvels of technology and magic to be discovered here, but also perils, as nobody living knows the use or nature of anything found on this world. What looks like a clover could be a hand grenade, and a cannon shaped machine could be used for milking dragons.

In the area around Planet VIII, massive space whales float in languid measure, moaning low, loud howls, that somehow stretch across the vast and silent depths of space. These are majestic creatures of magic and lore. That is why the space whale poaching industry which has started to develop is so troubling. Despite the grace and beauty of these creatures, many see them as no more than a source of ancient valuable souls and magical flesh, making them a species that is slowly becoming endangered.

There are also traces, hints, and rumors, that this may be a place used by the Slayers, one of Hellifyno’s greatest foes. Traces of AM have been detected by probes, and there are hints that advanced technology, tech that is known to be used by the Slayers, has been recently employed in this area.

Planet IX
(Pluto)
A cold and icy world of vast plains of desolation, snow, and darkness, broken only by the hordes of billions and trillions of undead moaning beasts that haunt its land. These are creatures that crave flesh and blood, searching constantly in mindless swarms across a world devoid of any living soul. And yet, still they hunt, still, they roam, and occasionally a few manage to escape even the bounds of gravity, and fling themselves out into space, in search of something, anything, to satiate their hunger.

It is unknown where the undead came from or what sustains them. Some efforts have been made to try and contain this threat, or even eliminate it, but they constantly growing population seems immune to all attempts, and they have even spread in recent years, infecting the smaller moons that surround this planet.