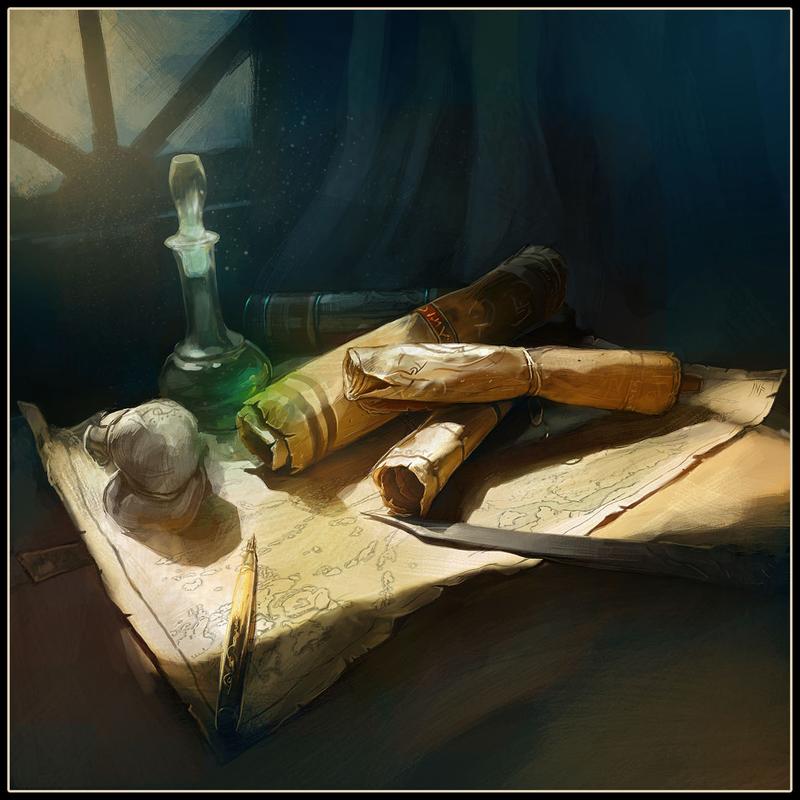 The small breeze blows against the chimes that hang in front of the door to the magic shoppette. It’s small stained glass windows make it hard to see inside, but the glow of candles and the smell of spirit warding incense smoke were very noticeable. As you approach, the floorboards let off a soft creak as you walk up the steps and to the front door. A welcome mat brushes the bottom of your worn boots. Opening the door, you’re greeted with a gentle ding of a bell and the soothing smells of brewing potions, various incense and of course the Dryad Tongue leaves drying on a rack hanging from the ceiling. The place was fairly quiet and calming. The soothing sounds of small crackling from the lit fireplace, the bubbling of brewing works, the hiss of a kettle and the coo of a bird that lingers somewhere in the dark rafters above. Upon looking at the ground, there would be various rugs for the comfort of traveler’s weary feet, a pair of chairs that accompany a small coffee table, all made of hand-cut sandalwood.

As the flames dance in the fireplace, the kettle resting above it let out a soft bellowing whistle. The Kettle didn’t need much time left. That small whistle triggers the entrance of a witch who entered the scene from curtain draped doorway. The Witch wore a large hat, larger than most other hats. She wore a name tag with the name “Morgan” etched on crudely and pinned upon her draping black garb. The witch’s wine-red hues observe you. “Oh? A visitor? At this time of night? I usually don’t get visitors at this time of night… well when I do, they’re usually staggering drunk and shouting such poison-filled words about their hate for witches. Ah, but that’s the curse of being a heretic, am I right?” She winks and takes a comedic gesture with her hands as she cocks a stupid wide-mouthed smile.  She seemed light-hearted and energetic, making fun of an otherwise glum situation. “Anyway, as a witch I’m rather observant.. So let me take a good look at you..I’m sure I can guess why you’re here.” She rests her elbow on the countertop next to the register. She squints her eyes and moves her mouth from side to side as she tries to read your body like a book. She makes a straining grunt and then a squeak. “Aaaannnnd I got Nothin’.” She relaxes from her strained position. “Now that I think of it… I never have been able to guess correctly… But I suppose persistence pays off! Except for when it doesn’t!” She eyes you some more, her red hues flicker from the worn coat to your belt, and down to your boots. “You must be new here.” She cracks a warm smile on her silly face. “Because I never forget a face! Except for when I do! Which is… Quite often now that I put some thought on that..” She shakes her head trying to get in focus with the conversation. “Nevermind that… uh, what was it you were looking for? A Spell? A book of spells? A potion? uhhh Maybe it’s a spell that get’s you a potion!?” She shook her head. “Obviously that last one was not it.”

Your eyes wander her wares and goods… but a small stack of scrolls by the window catches your eye. The opposite side of the room from the roaring fire. The cooler area set the mood for relaxation… The moonlight hit a decanter that emits a dulled blueish-green tint, lightly illuminating the scrolls. “Oh?” The witch was surprised by your interest in the scrolls. “I see, you’re interested in scrolls then. Didn’t take you for much of a reader, to be honest… Uhh… No offense!” She laughs a bit awkwardly trying not to insult your intelligence with her inability to read her fellow man. “These scrolls are fresh off the press! Well… actually I handwrite them… Now that I think of it a press would probably be a good investment.” She raises a brow and thinks to herself a bit. “Oh! But they’re the Moonlight enchantment scrolls. If you’re a friend of the night, these are for you. As long as the moonlight reaches the enchanted weapon the weapon will be covered in a glowing aura… Much like you see in that small glass bottle!” She lets her hand gesture to the dim-lit bottle.

Just then the kettle let out a piercing whistle. It breaks you and Morgan’s concentration on the topic of enchantments. “Oh my, where are my manners! My tea was brewing. Would you care for a cup? and a chat by the fireplace? The tea is a soothing honey and ginger spice, with just a touch of Pheonix oil.. to keep the tea at an adequate temperature that is!” As she makes her way to the fireplace to remove the kettle, you politely agree to the cup but mention you were on a time constraint. Morgan understands and grabs two puter mugs as she races over to the fireplace and removes the kettle. She was quick to pour yours first and gently places it on the counter next to you. “So, given how interested you are in those scrolls… I take it that you’ve made up your mind?” You nod and reach for your coin purse for a the coin, anticipating a price. “The price… Oh! The price, yes! Uhh Let’s see… it is still a work in progress! So how does ten thousand gold sound?” A puzzled look surfaces on your rather content face. The price was rather outrageous for a prototype, but before you can decline you notice her smile. “I’m kidding, I’ll depart with the scrolls for one hundred gold.” She giggles. “You should have seen your face, friend.” You also find this humorous. Your hand gently picks up your mug of tea and you have a generous gulp of the amber liquid.

The sweet pumpkin flavor reminds you of the fall season and all the warm colors and cooler winds it brings. With your free hand, you gently unlace the coin purse that hung from your hip and begin to count out the asking price in increments of ten. You gently place the pillars of ten coins neatly on the countertop. Morgan watches carefully and soon enough trusts you to count on your own as she gathers the items you requested to purchase. “Such a relaxing evening. Enjoying a drink with a friend with the crackling fireplace providing warmth and light, talk of scrolls and encamtations of the moon.” She gently places the scrolls in a wooden box. The inside was lined with a blue stained leather that wouldn’t be so harsh on the tattered papyrus the scrolls were made of. She closes the box and attaches the safety latch to keep it closed. The box had a moon cycle engraved on the front, for decorative purposes. The box was stained black with gold and light blue details in the engravings.

The slams a few clacking keys on the register and with a charming ding, it was your time to pay. “Fork it over, buddy!” She giggles, being a bit playful. “I hope to see you again after this! Come again! Show me what you do with these when you can!” You give her a reassuring nod, as you push forth all the stacks of coins like a high roller going all in at a poker game. She gives it a look over, just to confirm the amount and smiles wide. “Perfect! You’re free to enjoy the wonders of my work!” You finish the cup before collecting the box. Morgan gestures for you to leave the cup behind. Worry not, I’ll take care of this for you! Please, come again soon!” You wave her off and exit the shop and back out on your journey… You can’t seem to shake the feeling that you’ll see her again. Perhaps you’re destined to return to the odd witch and her little humble shop again? Only the gods would know.

A fitting end, for now.