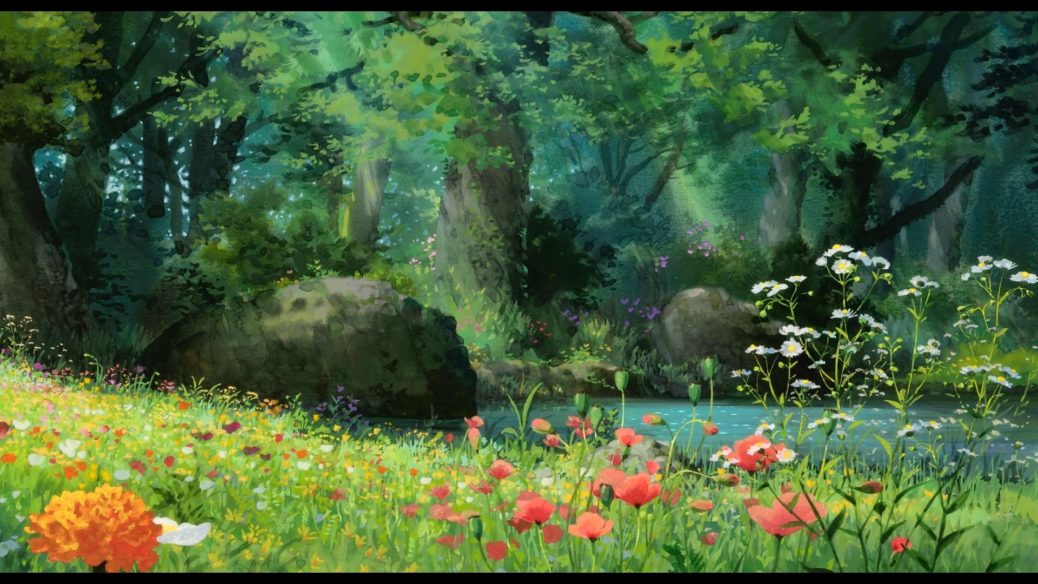 The clearing was peaceful and quite beautiful. Surrounded by thick, leafy foliage and brightly blooming flowers, the bubbling creek flowing through the center, it almost seemed like its own little world. Birds chirped and sang from their nests and perches around the clearing, adding to the natural music of the laughing creek. A large stag stood drinking from the clear water, not very far from a group of rocks that seemed to have been naturally worn to look almost like a crude table and chairs.

Shadows gathered and swirled for a minute before fading away to reveal Emuna. Her panther ears flicked as she took in the sounds and emerald eyes scanned the clearing as if looking for something or someone. She was dressed for comfort, an oversize sweater (one she had stolen from Darrin that morning) and a pair of leggings, she wore only a pair of soft leather boots on her feet. Seeing no one, her tail flicked almost nervously behind her as she moved over to one of the ‘chairs’ that were present to wait.

It was almost a half-hour that Emuna sat waiting before shadows began to gather and swirl before fading away to reveal a trio of people. Emu went still and tensed a little as soon as they appeared, her emerald gaze watching them carefully.

The first of the trio, and the one who caught one’s eye immediately was a tall male with sandy blond hair and grey-green eyes. He was well built and his imposing stature was only added to by the unhappy frown on his face at the sight of Emuna and the large snowy white, speckled wings that flared defensively when he saw the woman who sat watching them. He carried a gun in a holster across his chest and a spear rested loosely in his hand, though he appeared ready to use either one as he placed himself slightly between Emuna and one of the other people he was with.

He wasn’t the only one who looked unhappy to see Emuna. One of his companions, the many small braids of ebony hair and her chocolate skin gleaming in the sunlight, glared at Emuna with disgust and something very close to hatred. A whip was coiled on her hip and a bow and quiver full of arrows were slung over her shoulder, a dagger resting on the hip opposite her whip. Her eyes were golden and reptilian, lined with saffron and grey scales. She flashed gleaming ivory fangs at Emu in a silent threat as she too moved between the woman and the third member of the party.

The third member of the party shook her head at the protectiveness of the other two before pushing her way between them. She was young, only about fourteen or fifteen and not nearly old enough to be called a woman. She was beautiful in an innocent and endearing manner with gentle, doe brown eyes that looked too large for her pale, cream complexion and framed by long, straight, dark hair that fell well down her back. A pair of creamy white lion ears twitched on her head and a long, matching tail twitched behind her as she moved calmly across the clearing to Emuna, the two guards, for that is what they were, trailing cautiously behind the unarmed girl.

The girl stopped just over two feet from Emuna and stared at each other in silence for a few moments before the doe eyed woman spoke, “Hello, Lady. It has been a long time.”

Emuna gave a polite nod , “Yes. It has, Aala. It is good to see you well. Please, sit.” Glancing at the two behind Aala, “Keysha and Sunny are welcome to sit as well if they wish.”

Aala nodded and moved to sit across from Emu, ignoring the hiss that Keysha gave the woman, Sunny only flicking the tips of his wings and ignoring Emuna altogether. Once Aala had settled on a rock, Keysha and Sunny standing on either side behind her and glaring at Emuna, gentle brown eyes studied the woman before asking softly, “Why did you want to talk with me, Emuna? Khalon really wanted to come and drag you back himself.”

Emuna actually bristled at the comment that followed the question, “I am not going back, Aala. I will not be his mate. I have a mate. And a home. And a family. Khalon has no right to me. He never did but he has even less now.” She took a deep breath before continuing, “I know that you are the healer and doctor within The Den. Have any of the women become pregnant?”

Keysha bristled herself and Sunny tense, wings flaring, when Emuna bristled, only to relax when she didn’t make any movement to hurt Aala. But, at her words, Keysha sneered, her dagger suddenly in hand and a shallow cut appearing on her cheek, “Teef. Jy verdien nie iemand so goed as hom.”

Emuna only just managed to avoid flinching at the initial name she was called by Keysha but otherwise ignored her, and the blood that dripped from the cut on her cheek. Keysha didn’t know. None of them did. And, Emu didn’t blame them. Khalon was a strong warrior and a good leader but he wasn’t a kind man in private.

Aala gave Keysha a look that made the other close her mouth before looking at Emuna, “Pregnant? Yes, actually. Some of them have already given birth. Why do you ask?” Aala had her suspicions but, she wanted Emu to say it just to be certain.

“I’m pregnant and I want to have some idea what to expect,” the response was calm and certain, though both Sunny and Keysha inhaled sharply in surprise. Aala though, only nodded, having expected exactly that answer.

“I figured as much. Who is the father? Do you know how long you have been pregnant?”

Emuna raised a brow but answered promptly, “Darrin Smith. My mate. I have been pregnant for somewhere around four or five weeks. I want your help because I have no idea what to expect here, Aala. But, I will pay you the price that you ask.”

“I want to meet him. As for payment, I want two dozen of your energy potions. I will set up the equipment in the office, you remember that place right? And, I will meet you and your mate there tomorrow.”

Emuna nodded, “I remember and I will be there. I will ask Darrin but I will not force him to come and, if he does come, he is to be treated with respect. He might be my mate but, he isn’t me and has had no part in harming or betraying you and yours, nor had he made any of you into what you now are.”

Aala nodded, before looking at the two guards who seemed annoyed but also agreed, “Okay. You have our word that he will be treated with respect should he choose to come.” An agreement reached, both Aala and Emuna rose and gave the other a polite nod.

The guards remained silent but kept wary eyes on Emuna until she vanished in a swirl of shadow to the tavern.

Emuna gone, Keysha looked at Aala, “Why would you agree to help HER of all people!? She betrayed us and abandoned us when we needed her most! Not only that but, she refused to have anything to do with Khalon, despite him having saved The Den more than once.”

“Enough Keysha,” Oddly it was Sunny who spoke, wings fluttering a bit, “Emuna has been kind to us, even if she did leave us and make us into what we are, she has done everything she can to help us and you know it. You should just hope that her mate won’t get angry when he sees that scratch you gave her or finds out that you called her a bitch among other things.”

Aala nodded in agreement with Sunny, “She has done the best she can. She has been hurt in ways you can’t imagine, Keysha. I know you are just trying to protect me and that you are jealous of the feelings that Khalon has for her but, you need to leave her alone before something irreversible happens. You will behave yourself tomorrow. That is an order.”

Keysha gritted her teeth but nodded, “Fine. But I don’t have to like it.” Those words spoken, the trio vanished in a swirl of shadows and the clearing was left empty once more.