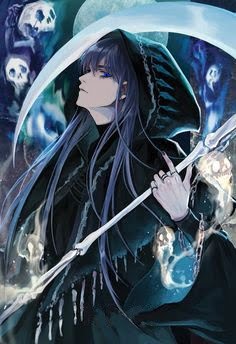 An idyllic village by a riverside. Simple, peaceful, and far removed from the rest of the world, alone near the bottom of the Western Continent. Secluded by hills and valleys, it was the perfect place to go unseen or unheard. On this day, the people of this village went about their lives, some with fervour, some with resignation. It was cloudy, but the sun was just bright enough for some rays to shine down and cast long shadows across the grass. The river was small enough that it wouldn’t flood dangerously, even if it rained for days on end, and few monsters lurked here – certainly none that the villagers couldn’t fend off with a bit of effort. Nothing ever happened here.

So, it was with considerable consternation that the villagers found a young man standing in the stream that day: Dark-haired and of middling height, skinny like a willow branch, and possessed of a blank, hollow stare. Looking into those eyes was like watching a rainstorm from a pair of windows. It was calming… and terribly unsettling. Nothing of this sort had ever come to the village; certainly no boys appearing out of thin air with special eyes that just screamed ‘protagonist’. It was well known that wherever such people appeared, trouble followed, but the villagers didn’t want to provoke such a person either by threatening him. At first, they tried hailing him. Failing that, they simply left him alone, and carried on as he stood immovably in the stream, staring into nothingness. The village quickly returned to its everyday idyllic atmosphere, while the sun slowly climbed into the sky, brightening as it went.

The boy’s train of thought was anything but idyllic. Behind those empty eyes brewed a storm, churning itself into a frenzied cyclone. He saw it in his head – wind and flame ripping through the village, dismantling the houses, incinerating the people. The screams of the dying, the smell of blood and burning flesh. The final step…

It was the right thing to do, wasn’t it? Not the moral thing, or the good thing, but the right thing. The final step, to losing what little morality he had left. That last little bit of righteous fury, slithering around in the back of his head, telling him that justice was real, that it was worth fighting for. That good people should prevail, and that the wicked should be judged. That the worthy should be rewarded, and idiocy punished. But, as Hellifyno had shown him over and over, to believe this was, in itself, idiocy.

Hellifyno had scorned Helvegen’s attempts to be heroic; it seemed he simply wasn’t destined to be a hero. But heroism wasn’t all there was to life, or happiness. He could be the wind shaking the grasses, the waves eating the shoreline, the fire blazing in the hearth, the storm racing across the heavens. He could be an engineer, an advisor, a friend, a lover.

He had found love, in the form of an eccentric queen and her devoted maid, members of a primordial family of mafiosos. In order to reconcile this love with his ideals, though… he had abandoned his morality. Discarded it, so that his stomach wouldn’t turn when the maid ate someone alive. So that he wouldn’t cringe when he thought about the queen devouring other people’s life essence to sustain her own. So that when her family members did something unspeakably an unnecessarily cruel, he would not be spurred to act against them.

Conscience was such a pesky thing to shake. It took a serious effort for one to dispose of it completely. That was why Helvegen had come here, after all. To dispose of his conscience, and erase what little morality was still creeping around in his head, by murdering these people in cold blood. Finally unleashing all the rage and hatred he’d had bottled up inside, towards himself and the injustices he’d seen… by massacring a bunch of innocents. It made no sense, but that was the point. It had to make no sense. It had to be an act of senseless, wanton violence, that of course would go unpunished. And if there was no justice, there was no use for morality. Helvegen would prove to himself that there was no use to being ‘good’, and that there could be true solace and indifference in amorality.

No remorse. No hard feelings. No big deal.

The corner of Helvegen’s mouth twitched. Overhead, a storm was beginning to gather, swirling into existence directly above his head. It was his storm; the storm within, twisting his insides into knots and staying his hand, and the storm without, preparing to crack down on this village, rend the earth and trees and houses and people until all that was left was a barren crater in the middle of nowhere.

He was nowhere. These people were nobodies. They would only miss each other, and couldn’t do so if there was no one left to feel that loss. No, nothing would be lost… the god’s fist clenched, slender fingers and thin frame belying his impossible might, the same might he would unleash upon the unsuspecting heads of these innocents, for the sole reason that he could, and no one would stop him, and doing so could not be wrong, because there was no right and wrong–

The villagers had started running from the water’s edge, seeking the shelter of their homes from the coming storm. There hadn’t been any clouds all night, so what was this morning storm doing here? Did it have anything to do with the silent boy in the stream, gazing out from behind an unruly tangle of black hair, eyes alight with frozen flame?

Had he come to kill them all?

Helvegen blinked. That hadn’t been his internal monologue.

“Of course it’s me.” Another boy had come to join the first, standing in the river beside him. In fact, the one was indistinguishable from the other, besides the garments they wore. While Helvegen wore a grey cloak and simple clothes beneath, The Other was dressed from head to toe in black, in a statement that was at once ironic and sincere. Equally sincere was the smile he wore, as he looked upon the little riverside village as a wolf might look at a lost lamb. “Why are you hesitating? Don’t you love them, Helvey?”

“That has never been in question,” Helvegen answered stiffly, refusing to look The Other’s way.  “You can’t make me doubt that, no matter what you do. So why are you here?”

“I want to see if you’ll do it,” the boy in black giggled. He extended a single clawed finger towards the village. “I want to know if you’ve got the amoral integrity to call a storm and kill ‘em all. Finally take that last step and become the guy you always wanted to be. Look at yourself, Helve – you’ve got everything you wanted, but could never have. A girlfriend, a home, people who love you, and a… maid, I guess, but whatever. The point is, all that’s standing between you and complete reconciliation are the lives of these people.” Apparently giving up on the gesticulating, he slipped his hands into the pockets of his leather jacket, half-lidded eyes watching the villagers run for shelter.

“Their lives mean just as much as mine,” Helvegen whispered. “I-”

“See, you can’t think that way anymore,” The Other cut in sharply. “You’re a god, fighting for Hellifyno. These people are nobodies, faceless in the grand scheme of things. They are irrelevant to you and to the world.”

It was easy for The Other to say. From his perspective, practically everyone but himself was irrelevant. Helvegen, on the other hand, had always embraced the idea that he was… equal to everyone else. That being Jormungandr’s son didn’t mean anything. But now, as the deadly storm gathered above them, he realized that The Other was right. It couldn’t be true anymore, otherwise he couldn’t abandon these higher concepts for Magicia and her family. And he loved her above all, above his long-held ideals, above his own integrity as a person. He was sworn to her.

“This is the way Ruby thought,” he muttered. “She thought the lives of people like these were meaningless toys for her to destroy as she saw fit.”

“Not quite,” The Other observed, turning his gaze towards Helvegen, reveling in the torment and rage he saw there. “You don’t see these people as meaningless, or playthings – quite the opposite. They are a means to an end. Your end.” A little smile gradually spread across The Other’s face as he saw, at last, acceptance.

Cold fire grew colder, until nothing burned there. Only death. Letting out a long breath, Helvegen felt the last of his humanity slip away, and gave a single nod.

The idyllic village by the riverside was no more.

The Other laughed, a hearty, jovial laugh that echoed through the hills and valleys nearby. He pranced on ahead, dancing and spinning among the ashes, kicking at what little remained of the structures and corpses. “You know what this means, don’t you?” He shrieked, laughing into the rain that now came pouring down like the sorrow of a god. “We’re the same now, you and I. You can’t ever, ever claim the moral or ideological high ground again, because now you’re just as much of a monster as all of them – as all of us! You’ve finally come full circle, Helvey, finally become the very thing you cursed when you first came here.” He turned, grinning triumphantly.

“It’s like it was always meant to be, you know?” The Other hissed, stalking back towards Helvegen. “I’m your logical conclusion; the person you are meant to become. Look at you, you beautiful boy – you’re almost there. Just need a little more black in your wardrobe.”

The Wanderer didn’t bother to respond. He knew The Other had left already, was celebrating his triumph. He had walked himself right into his preternatural foe’s hands… and yet, he didn’t mind, because this time, he had intended to.

“That may be,” he said quietly, feeling a smile of his own dawning on his face. Ash and smoke filled his vision, but he ignored them. They meant nothing to him anymore. “That may be, but I’m fine with that. I have people I love, and who love me. I have a home. I am Helvegen of the Wind, Tutelary of Paracosm and a god of Hellifyno. And you? You’re alone, hateful and hated in turn, with nothing of your own. You don’t even have a real name.” That smile lingered for a while longer, just as Helvegen lingered among the ashes. To remember the people he’d slain. To remind himself of why he had come here. To realize that he regretted nothing.

And then, he left.