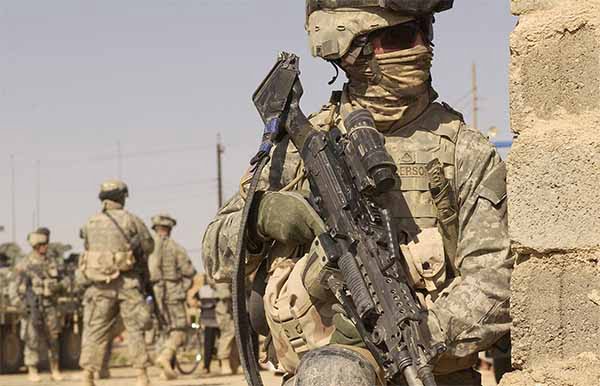 That god awful, nose burning, and yet, disgustingly divine smell.

Zoey inhaled deep before pulling the band of her head covering back over her face, a small cough rumbling from her chest. It was nothing but the pure stench of trash, tires, refuse and the gods only knew what burning. It was a beacon. A calling. A homage in her brain to the notion that she was back at work. For the next 16 months it would become home.

She had missed it.

More so than she would have ever liked to confess.

She was insane to return, they had told her. Senseless to go back to that lawless land. “Alright…maybe I am…but I can’t clarify it. Can’t feature in words why the draw to return is so fevering.”

Perhaps she was truly insane.

Putting her life on the line to do nothing but go marching for miles and miles? To put a few rounds down range?

The conflict about this forgotten land was exactly the same as NAM in the 70’s. No reason to be there, not our fight they’d outcried. Zoey didn’t care. It was in her job title to fight where she was told. To use her finely honed skills where her country needed her to do so.

She never once argued it. If she had she wouldn’t have signed that electronic pad with her signature.

Pebbles and sand churned up from beneath her boots. A language far from her own drifted in and out across covered ears as the world began to wake. Livestock let out little bleats, crows, and calls. This world…so dissident from her own became an obsession. Why had she related to such an atrocious, tactile experience?

There was something soothing in the sunrise. Soldiers chatted among themselves like gossiping old ladies. Packs creaked and groaned with each step. Weapons clicked as they shifted it to make the strap slightly more comfortable. A futile attempt. 175 pounds would never truly get comfortable. The tank and vehicles behind them crawled slowly, an enigma of a protective barrier that didn’t work. Gunners perched atop trucks blared music in the green zone.

A fist would raise, music would pause. Soldiers would still. Silence would creep, breaths would hold tight. And they’d stop, knees finding the ground, she would take to drawing a low ready rifle up until the center line matched across in the hairs of  her sights. Each of them would make a slow, crawling sweep of bombed out buildings, waiting for a sight of something beyond the ordinary and then….they’d continue.

Majority of the time.

An adrenaline rush that lay in a slow, steady drip.

Slept and dreamt about it.

This was Ramadi. The land where one could wake to armistice or a thunderous boom.

Zoey had found herself caught back up in its embrace.

An addict finding their fix.